Hospitals may not yet have felt impact of Covid-19 surge, Reid warns

Healthcare system is only ever two weeks away from overwhelmed, says HSE’s chief clinical officer 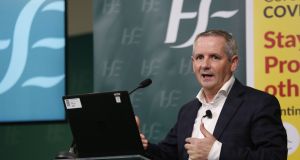 Health officials are fearful the country’s hospital system has not yet seen the full impact of the large number of new coronavirus cases in recent weeks.

There is a time delay, or lag, between spikes in confirmed cases and increased hospitalisations, which health officials are bracing for heading into the coming weeks.

HSE chief executive Paul Reid yesterday warned that “we may not fully have seen the lag effect of the cases that have come forward in the last few weeks”.

There were 330 coronavirus patients in acute hospitals, and 42 in intensive care yesterday morning, said Mr Reid.

In the fortnight up to Monday there had been 19 people admitted into intensive care. This included one person in the 0-10 age cohort, six in the 35 to 64 age group and 12 aged 65 and above.

HSE chief clinical officer Dr Colm Henry said spikes in cases across Europe show “we are only ever two weeks away from overwhelmed healthcare systems”.

Hospitals had not yet had to rely on their “surge capacity” in intensive care, as required during the first wave of Covid-19 in spring, he said.

Some positive signs have emerged that the impact of the countrywide Level 5 lockdown, and previous restrictions, are “starting to kick in”, he said.

The incidence, the rate at which the disease spreads, is “beginning to slow” among most age groups, he said. The one cohort where the virus spread continues to rise is among older age groups, said Dr Henry.

The high numbers of cases seen in previous weeks among younger people is now “rapidly” finding its way to more vulnerable older demographics, he added.

There are 70 schools where public health teams believed the virus spread within the education facility. In these cases the average number of further infections was three people, said Dr Collins. Schools had a “much lower level of onwards spread” than other congregated facilities such as nursing homes.

Dr Collins also said in a quarter of cases where a pupil or staff member had contracted the virus, public health teams had not contacted the school.

“Not everybody who is a confirmed case of Covid-19 has been within the education facility within their infectious time period, and if that’s the case then we don’t need to do a public health risk assessment,” she said.

The latest deaths bring to 1,902 the overall number of people known to have died with the disease in Ireland to date.

The team also announced an additional 866 confirmed cases of the virus, bringing the overall total to 60,297 since the outbreak began.

The median age of the latest confirmed cases is 35 years old, with cases almost split evenly between men (428) and women (438).

Chief medical officer Dr Tony Holohan said again that it is vitally important that anyone experiencing symptoms of Covid-19 self-isolate and phone their GP for further advice.

“Self-isolate means stay in your room and avoid contact with other members of your household. Doing this will protect those you live with by interrupting the chain of transmission. I again appeal to everyone to behave as though you are a close contact. Stay at home, other than for essential reasons.”

Covid-19: Time for Government to reassess strategy for tackling pandemic