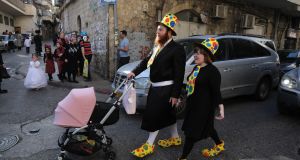 Israel’s world-leading coronavirus vaccination programme will not bring it to “herd immunity” in coming months because children are not yet inoculated, according to one of its government’s top pandemic advisers.

Scientist Ran Balicer, who chairs a panel of public health experts advising Israel’s health ministry, said the vaccination programme that has so far injected more than half of its population will allow it to “take more chances” with economic reopening. Restaurants in Israel, for example, will be allowed to reopen for indoor dining next week, he said.

Mr Balicer warned, however, that herd immunity, which describes a population-wide immunity threshold that would effectively signify the end of the virus as a major threat, will remain out of reach until a vaccine has been officially approved for children under 16, who make up 30 per cent of Israel’s population. He suggested herd immunity is not expected until more than 75 per cent of the total population gets vaccinated.

By Wednesday morning, Israel had injected more than 4.8 million of its population of nine million, or 53 per cent, with the Pfizer/Biontech vaccine. This is about seven times the proportion in Ireland. About 3.5 million Israelis have also received their second dose.

Mr Balicer said Israel was closing in on its target of getting 90 per cent of its older citizens inoculated, which will give it more options in the ongoing reopening of its economy pushed by its prime minister, Binyamin Netanyahu.

He said the virus would still circulate among children even after all adults were inoculated: “It is likely that we will not be able to prevent the disease disseminating in the population, or reach herd immunity, for the next few months until . . . such a vaccine campaign [for children] has been held.”

“The impact of the virus on public health will be reduced [before then] but not fully negated. We are trying to keep the disease at bay to allow us to open up the economy in the best way possible.”

Mr Balicer said “the jury is still out” on whether the vaccine prevents onwards transmission of the virus.

The press briefing was also addressed by Israel’s top public health official, Sharon Alroy-Preis. She revealed that Israel decided to tighten up its border and quarantine rules after it used technology to track mobile phones, discovering that up to 60 per cent of people who were supposed to be self-isolating after foreign travel were not doing so.

Ms Alroy-Preis said the Israeli government used an unnamed company to monitor the locations of mobile phones that entered the country from abroad. Before its rules were tightened, Israelis returning from abroad were supposed to self-isolate, usually at home and within a 500m radius, for 10 days, with the exception of going out for a virus test on day nine.

She insisted the tracking did not reveal the identities of those whose phones were surveilled. The tracking company found that the majority of phones that entered the country from abroad did not remain in the one place for the period expected.

“When we saw that, we realised we had a problem,” she said. “We had chains of infection originating in people who came from abroad, even though they were supposed to be in isolation.”

Aiman Saif, the official in charge of the rollout of the vaccine among Israel’s Arab communities, who make up a fifth of its population, said the government is pushing to get its programme mostly completed before the start of Ramadan, which begins this year on April 12th.

Only 40 per cent of Israeli Arabs are vaccinated, lower than the population average. The proportion of those currently infected has also risen from 10 per cent a couple of weeks ago to almost 25 per cent now, he said.

Israel recently said it would also vaccinate about 110,000 Palestinian day labourers from the West Bank who travel over the border into Israel each day to work. Some Israeli health officials have urged the government to provide vaccines for all Palestinians to help end the pandemic.

Mandatory vaccination of healthcare workers would be ‘most intrusive step’ - regulator