Cork, Down and two other counties are currently being investigated 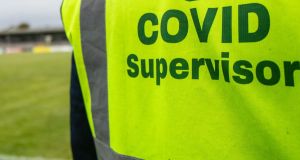 Croke Park may look to impose more stringent punishments than those cited under rule for any proven breaches of the January training ban.

The Cork and Down county boards, along with two other unnamed counties, are currently being investigated for alleged breaches of the ban. When originally announced in December it was due to last until January 15th, before on January 5th, the GAA announced that “given the current exceptional rise in infection rates of Covid-19 and the increased risk of community transmission” there would be no collective training permitted for intercounty teams for at least the remainder of the month of January.

Video footage has since emerged of the Cork football panel engaging in a group training session on a beach in Youghal on the first weekend of the year, while an incident involving the Down footballers training on the grounds of Abbey CBS in Newry was brought to the attention of the PSNI last week.

In announcing the extension to the training ban, Croke Park noted that any breaches of the provisions would be dealt with under Rule 7.2 (e), “Misconduct considered to have discredited the Association”, the penalties for which include a minimum eight weeks suspension for an individual member, and disqualification and/or expulsion for a team/unit.

A sub-committee has been set up to investigate the alleged breaches, and the penalties may not be limited to Rule 7.2 (e). “That question has been asked, whether they are restricted to imposing the penalties contained in that rule or not,” said Alan Milton, GAA director of communications

“There is plenty in it to be applied, as required, but this wasn’t just a GAA issue, this was also societal. There was an open letter sent out last week out by the DG [director general Tom Ryan] which clearly underlined the seriousness of it.

“The committee have started looking into it, and it’s still in its relative infancy let’s say. I’m not privy to their exact modus, and I don’t want to pre-empt what might come back. But these things have to be done properly, before they can come back with something for the public domain.”

In that letter sent to all county board secretaries last week, Ryan stated that “the safety of everyone in the game and indeed the broader community has to be our primary focus” and it “has never been more important for our players, coaches and officials to follow both the Government guidelines and our own provisions around training”.

The GAA won’t review the extension of the training ban until the end of the month, although for now the league competitions in football and hurling are still set to begin at the end of February. Counties had been told to submit operational budgets for the league and championship by Tuesday, although this is standard procedure and not directly related to the possibility of the league being deferred.

“No, at this moment in time there is no talk of the leagues not taking place,” said Milton. “This is standard practice for the planning phase that was first announced last autumn. Of course the [financial] figures will have an impact on all our competitions this year, but as things stand, there is no talk of delaying the league. This is just a standard exercise to ensure that counties know what they have to play with, financially, for the upcoming leagues.

Under the current government regulations in both jurisdictions, neither training nor games are permitted at club level

“The training ban will be reviewed again at the end of January, and any decision, like it has been since last March, will be depended on Covid figures at that time and in terms of Covid guidance. And you can see that despite the fact elite sports are permitted, a lot of sports are not pursuing that at the moment.”

Last year the Government pledged an extra €15 million to run the championships, with the distribution of the €40 million to the three main sports organisations – the GAA, FAI and IRFU – likely to bring in another €15 million; for now however there have no formal discussions on further funding for 2021.

“At this stage there are no formal talks with the Government on that, and I think in fairness the Government’s focus is elsewhere right now.”

Under the current government regulations in both jurisdictions, neither training nor games are permitted at club level. In addition, club and county gyms remain closed until further notice.

It also emerged on Tuesday that Mayo are to face no sanction from Croke Park after three members of their backroom staff attended December’s All-Ireland final against Dublin without authorisation.

For most of the championships, only a 26-man playing squad with 12 backroom members, plus two county board officers, were permitted entry to grounds; for the All-Ireland finals the extended 36-man squad were allowed attend, but there was no increase in the number of backroom members permitted.

Three further backroom members of the Mayo team were subsequently revealed to have attended. Following an investigation and communication with Croke Park, the Mayo county board has suspended all three for a period of three months, beginning from when intercounty activity resume.

A Mayo statement read: “Following a review process, all unaccredited members of the backroom team admitted their mistake, apologised sincerely for their actions and have been suspended for three months.

“These individuals attended the game without the knowledge of the county boards officers and the team manager. Mayo GAA would like to place on record our commitment to the GAA and the Government’s Covid guidelines, all of which are in place for the safety and wellbeing of our players, members and the wider community.”

Donnelly urges Cabinet colleagues to come to him with vaccine queries