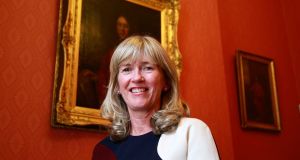 Professor Mary Horgan has described the risks involved in the return to play as “very, very low”. Photograph: Nick Bradshaw

A member of the GAA’s Covid Advisory Group has described the risks involved in the return to play as “very, very low”.

Professor Mary Horgan, an expert in infectious diseases, was speaking on Monday to the Gaelic Players’ Association Players’ Voice podcast and said that she would happily see her own children back on the playing fields.

“There is no such thing as zero risk but there is low risk and the low risk is in younger people who have no other major, underlying health conditions.”

Prof Horgan, who is president of the Royal College of Physicians of Ireland and former Dean of UCC Medical School, was asked about the significant level of reservations amongst GPA and WGPA members about going back to train and play.

“Same question as I get from people going back to work. Risks for under-50s, who are otherwise healthy, of having a bad outcome are very low. It’s the same as for teachers going into school or a number of your players might be healthcare workers: going home, washing your hands, having your shower when you come back and not using the facilities (at the venue) and ensuring if you have any symptoms at all that you get tested.”

Meath referee David Gough, who took charge of last year’s drawn football All-Ireland, revealed at the weekend that he had decided not to return to the field as long as social distancing is required. Whereas not questioned directly about that, Prof Horgan placed the social distancing requirement in context.

“Social distancing and the two [metres] versus one is in the context of all the other things we do. It’s really hard to live with two metres in anything we do, learning, sports, working and the science behind that is pretty inaccurate, older science.

“The biggest risk is people coming with any symptoms at all and while some may have no symptoms, they’re probably less likely to transmit the virus than those with a fever and cough.

“You can’t play sport two metres apart or even one metre apart. People may shoulder each other for instance but then they move apart again and even when they looked at rugby, which you would think is a high-contact sport players were only in close contact for less than 15 minutes.

“It’s a combination of not coming when you’ve symptoms, playing outdoors [which is 20 per cent lower risk] – you’re moving around the field very quickly – you’re a younger age group, you’re fitter and most don’t have risk factors associated with worse outcomes for some of the people who unfortunately either were hospitalised or passed on.”

One of the most eagerly awaited resumptions is that of the Cúl Camps, the GAA’s hugely popular summer activities programme. According to Prof Horgan, such recreation is more important than any concerns arising.

“First and foremost, it’s so important that physical activity for children is ingrained from an early stage. A lot of information is coming through from the science community about the impact of Covid-19 on children and adolescents.

“Studies show that their risk either of getting the infection or on the occasion that they do get it, suffering any bad impact, is low. When I talk to my paediatric infectious disease colleagues, they just don’t see it. You can’t keep socially distancing kids. It’s just not feasible.

“The bad impact of Covid on that age group is so, so low and based on the knowledge we have at this point in time the benefits of going back to sports for children without social distancing far outweigh the risks and all of my colleagues in paediatrics within the College of Physicians would absolutely support that.”

She was also firmly in agreement with the GAA policy on testing players. Questions had been raised about the contrast between testing programmes in professional sports and the absence thereof in Gaelic games, even at the elite level.

Pointing out that testing is at its most reliable when someone has symptoms, Prof Horgan also referenced the case of Essendon AFL player Conor McKenna, from Tyrone, who registered what now looks like a false positive before two further tests showed as negative.

“I don’t see any benefit in routinely screening as they have done in golf and rugby. I don’t think it’s cost-effective and it may not give you the right answer. If however anyone in a team had a cough or a fever they should get tested and followed up.”

On the subject of other sports, she was asked about the number of golfers testing positive on the PGA tour in America.

“The infection is not under control in the US. It’s not even a second surge; it just never got controlled over there so they’re living in an environment we were in last March when there were high levels of infection so we’re looking at two very different countries. We have our infection under control. Of course there may be a second wave but I believe with what we’ve learned and the capacity of our test and tracing system to upscale is really key.

“Comparing the island of Ireland with the States, we’re in a much better place.”