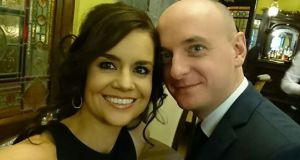 Ann Murphy and Mark Callanan, from west Dublin, due to get married this Saturday in Co Meath.

A Dublin couple who are due to get married in Co Meath this Saturday have said there remains “ambiguity” as to whether their wedding will be allowed to go ahead.

Mark Callanan and Ann Murphy, from west Dublin, were originally due to get married in July but postponed the event to this weekend, reducing numbers from 120 to 50 (including staff at the venue).

The couple were engaged in July 2018 and are living just over two kilometres from the Dublin-Meath border.

Dublin remains at Level 2, along with the rest of the State, on the Government’s five point Covid-19 scale but extra restrictions have been announced and the expectation is that the county could be moved to Level 3 in the coming days.

Weddings of up to 50 people are permitted under Level 2 of the Government’s Living with Covid Plan, which reduces to 25 people under Level 3.

Minister for Finance Paschal Donohoe told RTE’s Morning Ireland on Wednesday that people living in Dublin who are considering going on holidays elsewhere in the State should reschedule and that those from the county planning to have or attend weddings outside the capital should reconsider this.

“Our concern now, as of this morning, is that Paschal Donohoe on Morning Ireland has come out and said people should not travel for weddings outside of Dublin which gives us 72 hours notice that we’ve to make a decision but the advice is still only encouraging people not to leave Dublin,” Mr Callanan told The Irish Times on Wednesday.

“We’re also waiting on tomorrow’s decision from NPHET [National Public Health Emergency Team] and there’s all this talk of will Dublin be Level 3 or not...It really has been a rollercoaster. Yesterday we were over the moon, then we were distraught. We’re up and down.

“Leo Varadkar on Primetime last night was asked a very similar question and he batted it away and then Paschal gives a different answer so we’re hearing different things from different members of the Government.

“This time [IN]72 hours we should be at our wedding ceremony but even this time [IN]24 hours we probably won’t know if that’s going ahead.”

Ms Murphy said they along with other couples “just want clarity”. “We just wish that if they were going to put us in a Level Three that they did it on Tuesday, just do whatever it is and we’ll still take it and we’ll follow whatever is asked of us then but don’t not do it on Tuesday but then threaten it on Thursday and then maybe next week,” she said.

The couple said that their ceremony and drinks reception is due to be outside, with the dinner to be held in a room that caters for 180 people.

“We’ve both been working from home for the last six months. We haven’t let our kids meet any other people. We’ve locked ourselves away in the house for the last two weeks just to keep us safe so we’re not putting our guests at risk. We’ve just followed every single thing that has been asked of us,” Ms Murphy added.