Do these pictures look oddly familiar? How an Irish artist’s re-creations are going viral 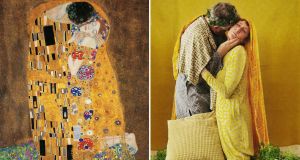 So what have you got up to while you’ve been stuck idle between these four walls? Molly O’Cathain has been amusing herself, her family and a growing number of people online with her Covid-19 diversion: staging famous art using whatever’s handy. Which is mainly her parents. The results are funny and oddly uplifting.

An Irish theatre designer based in London, O’Cathain was “stuck by accident” at home in Dublin 6 with her parents. In suburban isolation one evening, she recalled a tweet from the Rijksmuseum, in Amsterdam, suggesting people re-create paintings from their galleries. All she had around was her parents – the textile artist and yoga teacher Liz Nilsson and Brian Ó Catháin, who’s doing a degree in ancient and modern Irish – and her mother’s “excessive scarf collection”.

They started with American Gothic, by Grant Wood, and moved on to Klimt’s The Kiss; Hellelil and Hildebrand, the Meeting on the Turret Stairs, by Frederic William Burton; Salvador Dalí and his wife, Gala, photographed by Narique Meneses; Frida Kahlo and Diego Rivera, photographed by Nickolas Muray; and The Duke and Duchess of Urbino, the diptych by Piero della Francesca (in a restaging dubbed The Liz & Brian of Dublino).

Nilsson had three drawers of scarves in the hallway, “plus more blankets, throws, rugs, tablecloths, cushion covers than the national average,” says O’Cathain. “But we’re also using curtain tie-backs, ties, old tights, paper and Pritt stick, raincoats and long johns. The other night my dad pieced together a sword from a piece of wardrobe, a kitchen knife and a spanner.”

“We really want to do the Arnolfini Portrait, but that’s a tough one. The walls are terribly white in this house, and we’ve discovered my parents own nothing in a dark- to mid-emerald green. So I’m going to have to get very creative with that one.”

Reactivated instagram to while away the plague I'm unexpectedly spending with my parents. Day 1: American Gothic (Well it's really day 6 but whatever)

The accidental project is proving a positive during the coronavirus pandemic, and at the end “at least I’ll have more photos in my weird collection. Maybe by Christmas 2020 they’ll make a calendar or photobook. Or at least some funny Christmas cards.”

Last year O’Cathain moved from freelance design in Dublin to being a production design assistant at the British National Theatre, in London, learning “from the scale of work and ambition the National can afford to work at”. She was back in Dublin working on two shows in the excellent Where We Live (part of Dublin’s St Patrick’s Festival), which was set to open on March 12th, the day Ireland closed down.

“Sadly, one show opened and closed on the same night, while the other never got to open. That show, Hothouse, was with Malaprop, the theatre company I cofounded in 2015. I’m hoping we’ll find a new place for it later this year or next.”

The other, Everything Not Saved, is due to run on the Peacock stage at the Abbey Theatre, in Dublin, in July.

She says that she has had a great reaction to the posts and that people are sending requests. “Lots of very sweet friends and colleagues say they’re bringing them joy. Theatre people are some of the best ever. I really miss working because of the community we have. This is such a tough time for all freelancers, given the uncertainty of our work. So many people lost their carefully planned next six months of work in one day.”

It’s odd being stuck in your parents’ house without your things, she says. (“I had packed for three days. I bought runners and a sports bra in Lidl so I can exercise.”) Her next three projects have been cancelled, “but I’m very lucky: my family are all safe and healthy, and I’m thinking a lot about everyone stuck in much more difficult situations. This is just pure silly escapism.”

As a theatre designer she’s resourceful. “I normally trawl through salvage yards, charity shops and costume-hire departments. Now I’m digging through my parents’ cupboards, looking for something that looks a little bit like an ornate metal helmet (a pasta saucepan). I also have really enjoyed people getting enjoyment out of them online. It feels a tiny, tiny bit like when I design something for theatre that brings people joy or engagement.”

Doing the stagings with her parents, “we’ve totally had the craic. It’s very silly and ad hoc, just what we do after dinner instead of watching telly. They’re generally as keen as me, I think... and they don’t take themselves too seriously. I’ve ended up unexpectedly living with them in a house I’ve never lived in before. It feels like we’re having to learn how to coexist as grown-ups, and this is helping keep it jovial.”

An Post to begin free coronavirus ‘check-in’ on vulnerable persons