Planet Business: Staying in for 2020 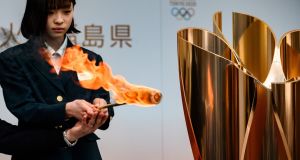 The Olympic flame is displayed outside Fukushima railway station. Tokyo 2020 is postponed until 2021, but will still be called Tokyo 2020. Photograph: Philip Fong/AFP

Image of the week: Tokyo Story

The Olympic flame, displayed here in Fukushima ahead of the since-abandoned torch relay, will stay in Japan until the Olympics and Paralympics are held (hopefully) in 2021. The flame, according to International Olympic Committee president Thomas Bach, will be “a symbol of our commitment and also as a symbol of hope”, which may be small comfort for Japan, the third-largest economy in the world. Bach also cited “symbolic reasons” for the IOC’s decision to keep referring to the Games as “Tokyo 2020”, despite the fact that they won’t actually be happening in 2020, with the move likely to save warehouses of merchandise, clothing and venue design backdrops from the incinerator. Maybe all of 2021 can be “2020 take two”, with this year written off as non-canon.

At least this number of people in the Republic watched Leo Varadkar’s Covid-19 address to the nation on St Patrick’s Day, making it the most-watched broadcast on Irish television this century.

People in France who watched president Emmanuel Macron’s “we are at war” address on coronavirus on March 16th, a record audience for French television.

Getting to know: Baby Yoda

When Disney set March 24th as the launch date for streaming service Disney+ in eight European countries, it could never have imagined that their populations would be staying at home on near-lockdown, with tens of millions of children off school. And while its arrival did see some of the technical glitches that occurred during its massive launch in the US in November, any hiccups were likely to be of the victim-of-its-own-success kind.

Animation sequel Frozen 2 is conspicuous by its absence, but the good/bad news for many parents around Ireland is that they should soon be very familiar with the service’s top draw: the Child, aka Baby Yoda, from original series The Mandalorian, a Star Wars spin-off.

Disney, along with other streamers, is using a reduced bandwidth to ease strain on broadband networks, while in one of those eight countries, France, it has postponed the launch until April 7th at the request of the French government.

Although it raises questions about whether they ever needed to be paid quite so much money in the first place, it is good to see some chief executives at major companies forgoing their salaries during a crisis that has seen millions lose their jobs. Here are five of them.

The Irish boss of Qantas was one of the first to confirm he won’t be paid until the end of June. Like many airlines, the Australian carrier has since grounded almost all of its fleet.

The co-founders of car-hailing service Lyft will donate salaries to help its drivers throughout the pandemic. Lyft is now refocusing on delivering essential goods rather than people.

The boss of General Electric said he wouldn’t be paid for the remainder of 2020 as he announced that GE would cut 10 per cent of its US workforce.

The boss of William Hill in the US is donating his salary to a foundation set up to help temporarily laid-off employees.

The president of hotels chain Marriott, which has suspended the employment of tens of thousands, will not take a salary for the rest of 2020, saying the pandemic has been worse for business than 9/11 and the financial crisis combined.