Covid and Queen’s: ‘A very different year’ at the Belfast university

Despite high-profile breaches, offenders are a ‘small minority’ of students, president says 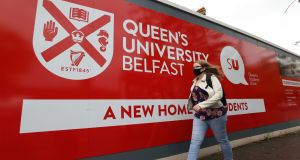 When the coronavirus pandemic took hold earlier this year, scientists sudden dominated the airwaves. “I never knew Northern Ireland had so many virologists,” was a common observation.

Many of those experts – not least the North’s chief scientific adviser, Prof Ian Young – were from Queen’s University Belfast. Throughout lockdown their medical research teams remained in the lab, studying the virus. Queen’s was part of the trial that discovered dexamethasone could reduce mortality in patients with Covid-19.

At the same time, the university was trying to get to grips with the “totally unprecedented” situation, says Prof Ian Greer, the president and vice-chancellor at Queen’s.

That included moving the summer term online; confusion over exam results in August, which resulted in 700 extra first-year students from Northern Ireland alone; and the preparations for a “very different year” on campus, with a mix of online and face-to-face tuition.

Much of this has been played out in the public eye, not least the scenes last month of house parties and on-street drinking in the predominantly student area of Holyland, which saw police enforcement of the Covid-19 regulations, although police pointed out that most of those fined were not students.

At Queen’s, 64 students were suspended for two weeks after the police issued Covid notices against them; at the Elms, the university’s own halls of residence, increased supervision was introduced and a social area closed at night after a video emerged of students dancing to Rock the Boat with no masks and no social distancing.

“We had trusted our students to be responsible, and they knew, or ought to have known, the measures that needed to be in place, so of course we were disappointed to see that particular episode in the social facilities,” says Greer.

“The vast majority of our students have been incredibly responsible during a very challenging and difficult time. Of course, sometimes there are lapses ... when that does happen we do step in and take disciplinary action.”

Yet he emphasises that those involved are a “small minority” and feels young people have often been unfairly stigmatised.

Most cases are among students, though 15 staff have had Covid-19. Greer says there have been “very low” infection rates in teaching spaces, with most infections occurring in accommodation, social settings and households.

Students with the virus – or who have been told to self-isolate – receive free accommodation for two weeks and other supports. Last week the university announced it would suspend accommodation contracts for three months to allow students who wished to return home and study remotely to do so.

Greer says guidance is needed from the Executive on the question of students returning home at weekends. He says the advice to limit travel is “more complex” with students, many of whom have weekend jobs outside Belfast.

Queen’s has also been considering the economic impact of Covid-19 on the university; initial estimates were that this could be £30 million-£88 million, though the current assessment is that it will “not be at the high end of that.”

Most reassuring is that student numbers have “held up”, though there was no additional income for the 700 extra students. Funds have been further reduced through the cancellation of conferences and other events; non-Covid research has been disrupted, as has research income.

In the unknown landscape ahead, there is also Brexit; Greer stresses that the university is “very keen to be able to work with colleagues in the South” .

“With Brexit, what we’d really like to see are incentives and support to allow cross-Border working.”