Covid-19: WHO warns hospitals across Europe could be overrun 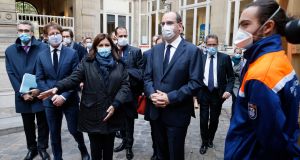 Health authorities have warned that hospitals are at risk of being overrun across Europe as countries see record rises in coronavirus infections and impose new restrictions to curtail the spread of the disease.

Austria, Belgium, Croatia, the Czech Republic, France, Germany, Greece, Italy, the Netherlands and Poland all posted their worst daily case numbers yet, and the World Health Organisation appealed for an “uncompromising” effort to stem the spread.

“Although the number of deaths reported in Europe last week is much lower than in March, hospitalisations are increasing and many cities are reporting they will reach their intensive care bed capacity in the coming weeks,” WHO director-general Tedros Adhanom Ghebreyesus warned.

In France, 18 million people are living under an evening curfew and risk fines if they are not at home by 9pm, while the Netherlands has shut all restaurants and bars. Belgium announced a four-week shutdown of cafes and restaurants from Monday, as the government warned hospitals were “clogged”.

“We don’t want to see a repeat of those unbridled evenings in which you try, like someone about to be punished, to enjoy a number of things one last time,” Belgium’s virologist spokesman Yves Van Laethem appealed to the public at a news conference. “So please don’t do that kind of nonsense this weekend.”

The British government shut pubs in Lancashire, and prime minister Boris Johnson warned he could override local leaders’ objections to restrictions in Manchester.

“If agreement cannot be reached, I will need to intervene in order to protect Manchester’s hospitals and save the lives of Manchester’s residents,” Mr Johnson said.

A rise in infections in Italy, which had so far avoided the surge elsewhere in Europe, prompted the government to impose fresh restrictions on gatherings, restaurants, sports and school activities.

“We have a situation that reminds one quite distressingly of the one that we already have experienced,” said Massimo Galli, the director of infectious diseases at Milan’s Luigi Sacco hospital, warning that the country had a two-week window to try to turn around the trend.

A meeting of the national leaders of the European Union in Brussels was disrupted by the disease, as Finnish prime minister Sanna Marin and European Commission president Ursula von der Leyen both had to abruptly leave after learning that a close contact had tested positive.

Polish prime minister Mateusz Morawiecki had already been unable to attend as he was in self-isolation, and diplomats acknowledged that the summit was likely to be the last physical EU meeting for some time.

“We will unfortunately not be able to host the informal summit we planned for November,” German chancellor Angela Merkel announced after she left the meeting. “I believe that this sends a necessary signal with respect to the need to reduce social contacts.”

Leaders had discussed efforts to co-ordinate on vaccine procurement and how to handle the pandemic, in a conversation that revealed a “grave situation facing Europe” according to Taoiseach Micheál Martin.

“There’s been a resurgence across Europe, the virus doesn’t lie quietly, the virus will thrive wherever you have congregation,” the Taoiseach said. “As long as we don’t have a vaccine, countries will be grappling with this issue.”