Covid-19: Too early to see case spike as serious threat to health 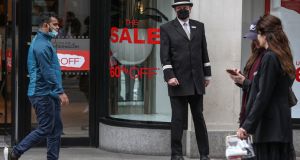 The course of infection will be dictated by “the action of each and every person in our communities across the country”. Photograph: Crispin Rodwell

The 85 Covid-19 new cases announced on Thursday has jolted the mood in the relentless debate over whether the State’s policies are too restrictive or too lax, and whether a significant part of the population may be getting jaded with the effort required to keep the virus under control.

Friday’s number (38) didn’t confirm that the situation has gone to hell in a handbasket, but it wasn’t terribly reassuring either.

Neither Thursday’s nor Friday’s numbers compare well with the rates we have been used to. There’s been a definite bump in the road.

Trinity College Dublin immunologist Prof Luke O’Neill said his “heart sank” when he heard the number on Thursday. “But it’s all about trends. You can’t take a single number, and Ireland has been doing great up to this point,” he said.

The ship may have listed a bit this week, he said, speaking before the release of Friday’s figures. “We have to keep the ship steady, as far as I am concerned.” There is no need for a knee-jerk reaction, but if the trend has changed, “then we are in trouble”.

The spike in national anxiety is not being helped by what is happening in mainland Europe, and further afield, where there have been disheartening resurgences of the virus.

In London, prime minister Boris Johnson announced a delay in easing some restrictions, and said face masks were to become mandatory in indoor settings such as museums and churches from August 8th.

“As we see these rises around the world, we can’t fool ourselves that we are exempt,” he said. “Our assessment is that we should squeeze that brake pedal.”

In Hong Kong, a high number of new cases each day over a five-day period led to a reimposition of restrictions.

The situation is not as serious here, or not yet anyway. One swallow does not make a summer, and it is the same in relation to one, or two, or maybe three days of high numbers of new cases being recorded. If it stretches beyond that, though, we are facing truly serious questions.

Kingston Mills, professor of experimental immunology at Trinity College Dublin, sees reasons for concern in the way resurgences have happened in Spain, France “and even Germany”.

He said that when the rules are relaxed for indoor gatherings, we are going to see clusters in households such as was the case with Thursday’s figure. It was not clear where the clusters were coming from, given that the rate of infection in the community was so very low.

In Boston, you can get a $500 fine for not wearing a mask outdoors. “It sounds draconian, but we do need to encourage people.”

The people in charge of our national response to the pandemic have been anxious to emphasise the ongoing importance of the same old messages – social distancing, avoiding large gatherings, washing your hands, wearing face coverings, meeting people outdoors and downloading the contact tracing app.

The course of infection over the coming weeks will be dictated by “the action of each and every person in our communities across the country”, the acting chief medical officer, Dr Ronan Glynn, said on Thursday.

So how worried should we be? Maybe it’s best not to try answer the question until the middle of next week.