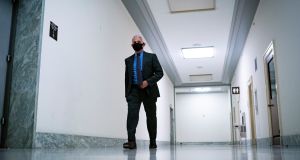 Dr Anthony Fauci: His own offspring will not be visiting him this Thanksgiving due to virus dangers attaching to his age and vulnerability. Photograph: Al Drago/New York Times

Mr Fauci said his own adult children would not be visiting him for the annual holiday next month, given his age and risk of contracting the virus.

“That is unfortunately a risk, when you have people coming from out of town, gathering together in an indoor setting,” he said. “It is unfortunate, because that’s such a sacred part of American tradition – the family gathering around Thanksgiving – but that is a risk.”

The fresh warning came as the number of Americans infected with coronavirus passed eight million according to official figures, prompting fears of a “third wave” of the pandemic in the United States, one of the worst-affected countries in the world.

In particular, cases are rising in areas of the midwest such as Wisconsin, Minnesota and Montana, which avoided the worst of the pandemic in the spring and early summer. US president Donald Trump is to hold a rally in Wisconsin on Saturday, despite the positivity rate passing 20 per cent in the state.

The renewed concern about the US’s coronavirus infection rates come as Pfizer announced it will seek approval for its coronavirus vaccine in the third week of November – two weeks after election day. The announcement is a blow to Mr Trump’s pledge to have a vaccine available before Americans go to the polls.  The president defended his handling of the virus that led to his own hospitalisation this month at events in Florida on Friday.

In his first public comments since his own hospitalisation for coronavirus, former New Jersey governor Chris Christie expressed regret for not having worn a mask while he was coaching Mr Trump in the White House for his television debate last month with Democratic candidate Joe Biden.

Mr Christie, who is overweight and asthmatic, attended the nomination ceremony for supreme court nominee Amy Coney Barrett on September 26th, which is believed to have led to the infection of several people. Mr Christie tested positive for Covid-19 a few days after Mr Trump did, and spent seven days in intensive care in a New Jersey hospital before being discharged last weekend. In a statement, he warned Americans to take the virus “very seriously”.

“The ramifications are wildly random and potentially deadly,” he said. “No one should be happy to get the virus and no one should be cavalier about being infected or infecting others.”