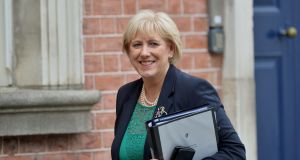 Minister for Social Protection Heather Humphreys: ‘If you’re a plumber, carpenter, beautician, gardener or electrician who is transitioning back to work, or the taxi driver getting your car back on the road – this grant may be of interest to you.’ Photograph: Alan Betson

Taxi drivers, plumbers and other self-employed workers will be given access to a new €1,000 grant under new plans finalised by the Government.

Under the scheme, to be led by Minister for Social Protection Heather Humphreys, sole traders such as electricians and carpenters will have access to the funds to help them “get back on their feet” in light of the Covid-19 pandemic.

The grant will be aimed at those who do not pay commercial rates and therefore did not qualify for the Government’s previously announced restart grant scheme.

The money will be given on a once-off basis and will be made available to those who have been severely impacted and have had to stop working.

It will apply to people who were in receipt of the pandemic welfare payment or jobseekers’ payment and closed their claim on or after May 18th, which marked the first phase of the reopening of society after the initial lockdown.

“If you’re a plumber, carpenter, beautician, gardener or electrician who is transitioning back to work, or the taxi driver getting your car back on the road – this grant may be of interest to you,” Ms Humphreys said.

“Whether it’s paying wages, fuel costs, purchasing PPE [personal protective equipment] or signage – this is an important grant to assist the self-employed to reopen their business and get back doing what they do best, providing crucial and essential services in their communities.”

Senior Ministers were last night finalising a package of economic supports for the midlands, due to be signed-off on Friday.

It is expected to include a top-up to the State’s restart scheme for businesses and extra funding for Fáilte Ireland to promote Kildare, Laois and Offaly, following the reimposition of restrictions in those counties after a spike in cases.

Further supports for local businesses through schemes operated by local enterprise offices and possible changes to the commercial rates waivers are being considered.

Separately, the Health Service Executive is examining plans for another self-isolation facility once its €25 million lease on the Citywest hotel and conference centre expires in October.

Brought on stream in March due to the anticipated need for a large self-isolation facility, just under 1,000 patients had used the 750-bedroom facility to isolate at the end of July, more than four months after the deal was signed.

However, with cases rising again and the usual winter pressures on the healthcare system expected in the coming months, a HSE spokeswoman confirmed plans for another facility were under consideration.

“The HSE has no established or approved plan to extend Citywest at present albeit that the requirement for a self-isolation facility of a lesser scale beyond October is currently being examined,” she said.

A further 92 cases of Covid-19 have been identified in the State, the National Public Health Emergency Team reported on Thursday, with no further deaths from the disease.

Dr Ronan Glynn, acting chief medical officer at the Department of Health, appealed to those living under renewed coronavirus restrictions in Kildare, Laois and Offaly to “hold firm”, and stressed cases were also occurring in several other counties.

Of the new cases, 43 are associated with existing outbreaks or are close contacts of a confirmed case. Twelve have been identified as community transmissions.

Meanwhile, a meeting of the Special Oireachtas Committee on Covid-19 Response heard nine unannounced inspections of meat plants have been carried out by the Health and Safety Authority (HSA) since May.

The HSA also confirmed that no improvement or prohibition notices – two of the enforcement measures open to the agency – had been served on any meat plants.

Siptu divisional organiser Greg Ennis told the committee his union’s members in the meat processing sector “remain petrified of contracting Covid-19 but feel that they must walk that tightrope every day and in many cases attend work, even if they are feeling unwell”.

Coronavirus: Almost half of Irish people believe the worst ‘is ahead of us’