Covid-19 Oversight Group could add to confusion over health advice

Whatever way you look at it, this is hardly a vote of confidence in NPHET 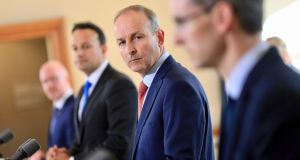 The Government has established a Covid-19 oversight group to clear and monitor recommendations from the advisory body established by the Department of Health to supply Ministers with reliable information about the pandemic.

This new group – to be called the Covid-19 Oversight Group (COG) – will, in effect, second guess any recommendations put forward by the National Public Health Emergency Team (NPHET) and vouchsafe whether they are practical enough to be implemented by the Cabinet when viewed against wider societal and economic impacts they might have.

Those fans of the British TV comedy series of years ago, Yes Minister, might be justified in seeing this as another example of the time-honoured practice of governments avoiding transparency by creating yet another review group to review the review group's findings. More pointedly, this new oversight group might be seen as an effort to insulate Ministers and the Government from the negative consequences of either ignoring or accepting a recommendation from NPHET.

NPHET is composed of health officials and medical experts who are charged with knowing the detail of how the virus works and what public health advice, restrictions and regulations should be in place to contain the spread of the virus. Up to now, its advice is transmitted directly to the Cabinet via the Minister for Health, Stephen Donnelly. Now, it seems, the new clearing group will screen NPHET’s recommendations and judge whether they are “practical” to implement.

The fact that it is a three-party coalition, involving traditional rivals, only exacerbates the tensions

The Irish Government is, in this respect, no different from many other countries where the reliability and efficacy of the official health advice has been called into question during the pandemic. The old phrase goes: doctors differ and patients die. In the Covid-19 crisis, conflicting advice from health professionals has run up against the understandable angst of political decision-makers. They fear that by taking the medicine prescribed by health advisors, it will kill the economy or at the very least not lead to the kind of recovery we all wish to see.

In the Irish context, this natural tension between the public health professionals and the politicians has occurred against a background of a long period of delay before a government was put in place after an indeterminate general election result. The fact that it is a three-party coalition, involving traditional rivals, only exacerbates the tensions. The fact that the new Government comes complete with 70 advisors for Ministers and leaders only adds to the problem.

The Albert Reynolds coalition with Labour (1992-1994) came to a premature end because of a chasm of misunderstanding between the principals and parties of the coalition. This Government, like it, has loaded up on advisors, and a competition of partisan tit-for-tat leaking has been the hallmark of its operation right from the beginning. Judged in this context, the extra layer of advice between NPHET and the Cabinet might only be fodder for the inveterate Cabinet leakers and waiting journalists.

The new COG is to contain civil servants on a cross-departmental basis and will kick into action each Thursday after NPHET has reported and make its decisions on what should be put to Cabinet the following Monday or Tuesday. No doubt the weekend media outlets will have a field day reporting on what has been left out from the NPHET recommendations and why COG has decided otherwise.

If these eminent people were confused, it is easy to understand how the ordinary citizen might also be confused

The most significant criticism of the current Government is that it has given conflicting and sometimes contradictory health guidance. The public are frustrated both by the pandemic itself and the mixed messages they receive from those in authority.

This is hardly a surprise given the attendance at the Clifden golf dinner. A Cabinet Minister who sat in on discussions about new guidelines clearly did not understand their reach. A European commissioner believed he was within the guidance and a Supreme Court judge was not very clear about their contents at a practical or personal level.

If these eminent people were confused, it is easy to understand how the ordinary citizen might also be confused. If the new oversight group achieves more clarity around messaging and what is practical then it will have achieved a lot.

But it remains hard to believe, having served in government, that an extra layer will render things more transparent.