Covid-19: No more deaths but 53 further cases confirmed in State

Over 90 per cent of cases reported on Sunday had been identified, acting CMO says 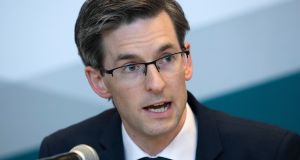 There have been no further deaths related to Covid-19 in the State but 53 new cases confirmed, according to figures released on Sunday evening by the Department of Health.

This means the death toll from the virus stands at 1,763 while the total number of cases in the State rises to 26,162.

Last Thursday saw a spike of 85 new cases. This was followed by 38 extra cases on Friday and 45 on Saturday in what the department’s Acting Chief Medical Officer Dr Ronan Glynn called a “clearly concerning trend”.

Dr Glynn said the source of transmission for over 90 per cent of cases reported on Sunday had been identified.

“This is a positive development in light of the number of cases reported over the past few days.

“However, our five day average for cases reported is now 47. We all need to continue to adopt a prevention mindset and continue making good choices to protect ourselves and others while trying to live safely with Covid-19.

“People are still susceptible, this virus has not changed. We know how to break the chains of transmission. Let’s stay the course by physically distancing, washing hands regularly, wearing a face covering where appropriate, avoiding crowds and doing all we can to protect each other.”

Some 45 are associated with outbreaks or close contacts of a confirmed case, four cases have been identified as community transmission.

Some 25 cases are located in Co Dublin, 19 in Co Laois, six in Co Kildare and the remaining three are spread across two other counties.

The National Public Health Emergency Team (NPHET) is to give advice to the Government next Tuesday before the Cabinet decides whether or not to move to phase four of the reopening plan under which pubs that do not serve food would be allow to open.

Earlier, infectious diseases expert Prof Jack Lambert has said it was not “the right message” to be saying that “if we open up the pubs then the schools won’t be able to open in September”.

The UCD associate professor also said he did not believe the State’s restrictive travel policy was the answer to dealing with Covid-19.

He said there were fewer cases of Covid-19 in Northern Ireland than in the Republic even though the latter had a more restrictive travel policy.

“We have to focus on where the clusters are in Ireland,” he said.

Speaking on RTÉ Radio on Sunday, he suggested “regional targeted openings” of pubs “maybe . . . would make sense instead of total openings. Or maybe we should go ahead with the openings. We’re kind of saying if we open up the pubs then the schools won’t be able to open in September.

He said Denmark had opened its schools and was doing quite well. “But they’ve also tackled the problem of community transmission much better than we have.”

Prof Lambert said Covid-19 “is going to go on for three years. We can’t stay locked down for three years and we can’t have our plan not open up or close down depending on the increases or decrease in the numbers of cases.”

He said the solution “isn’t to wait and see and have more restrictive processes than the rest of the EU and Northern Ireland.

“We have to have a plan that is viable and sustainable.”

Prof Cliona Ní Cheallaigh, associate Professor of Clinical Medicine at Trinity College and consultant at St James’s hospital in Dublin, said the recent increase in new Covid-19 cases were “ worrying in that there may be spread going on unnoticed in the community”.

However, she said, opening schools was “hugely important,” adding: “Children don’t seem to get very sick with the disease. There have been conflicting reports about children not being particularly good at transmitting the disease onwards so schools would seem to be a relatively sensible thing to do.

“And I think we need to look at the low cost, low harm interventions like getting the kids to wash their hands, to clean the door handles, to clean the taps in the toilet,” she said.

Speaking to presenter Damien O’Reilly on RTÉ Radio One’s Brendan O’Connor Show, she said people should look at getting children “out doors more as much as is possible in our climate.

Decisions to ease restrictions meant asking “are you willing to accept a one per cent risk of thousands of people dying?”

On Sunday, Sinn Féin health spokesman David Cullinane expressed concern about the number of workplace inspections being carried out.

While there were 67 HSE inspectors and 500 more were seconded into the system amid the pandemic, only an average of 220 on-site inspections were taking place per week. “That’s only one inspection every two weeks for the number of inspectors we are told are on the ground.”

The Waterford TD said there was an average of 10 enforcement proceedings a week.

He also hit out at the “absolute lack of controls” at airports. “Even the most basic temperature testing isn’t happening.”

Mr Cullinane said regional approaches to pub openings should be considered and “on the same basis as restaurants with time limits, proper social distancing and table service.

“We have to look at the difference between a small rural pub in Kerry, Galway, Waterford or Cork and ask is that the same as a pub that needs high volume on the high street in Dublin.”

Also speaking on radio, Deirdre Devitt, former chair of the Licensed Vintners Association and owner of the Two Sisters pub in Dublin’s Terenure, said she felt the way publicans were being treated was “tremendously unfair”.

Pubs “will be closed for 40 per cent of their year, that’s their livelihood. We’re talking about family businesses here, up and down the country,” she said.

“Why are the pubs carrying the financial burden of Covid-19? There’s no cluster that I know attached to pubs,” she said.

“I firmly believe we should open all of the pubs, that we should all have a guideline and that it should be a level playing field for everybody.”

A lot of publicans who “thought they were opening on July 20th have that stock and now they don’t know if they are opening on the 10th [of August]. I think it’s totally unfair. There seems to be a perception that Covid is going to strike in every pub in the country. I fervently believe that’s not going to happen,” she said.

Hospitals may not yet have felt impact of Covid-19 surge, Reid warns