Covid-19: How Denmark plans to finish vaccinating by June 27th

Danish healthcare system expects to vaccinate 100,000 people a day as supplies ramp up 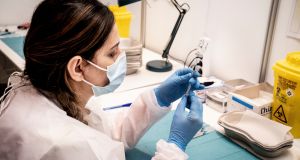 Everyone in Denmark who wishes to be vaccinated against Covid-19 will be offered the chance by June 27th, according to the Danish Health Authority.

It’s a quicker timeline than in the Republic, and far faster than the overall European Union aim to fully vaccinate 70 per cent of the adult population by September 21st. As all EU member states have had equal access to vaccines based on their population size, what explains the difference?

It’s down to a highly organised Danish healthcare system that expects to vaccinate 100,000 people a day, and an early bet on mRNA vaccines from Pfizer and Moderna that paid off.

Denmark has vaccinated at a faster rate than other EU member states since the first doses arrived. It has given 8.4 jabs per 100 people as of last week, compared with the State’s 6.6 jabs, 4.6 in the Netherlands and 1.7 in Bulgaria, according to Our World in Data figures.

Its speedy start was helped by using special needles to get bonus doses from vaccine vials, and choosing to administer all available doses instead of holding back supply for second shots.

It was also key that the country prepared early, buying freezers on the assumption that it would be administering the pricier Pfizer and Moderna vaccines, which require such storage. Other EU countries made preparations for a vaccine rollout anchored on the AstraZeneca vaccine, which is easier to store and cheaper. They were harder hit when AstraZeneca announced its vaccine deliveries to the EU would fall far short of initial targets.

For the same reasons, some EU countries chose not to buy all the Pfizer and Moderna doses they were offered under the EU vaccine purchase scheme. Other member states stepped in to buy up their unwanted vaccines.

The details are not public, but rough comparisons of announced orders with population size suggest that Greece, Belgium, Poland and Portugal did not take up all their Moderna vaccines, at least initially, while Germany and Denmark took up some unwanted doses. Denmark bought up as much as was possible, including extra doses, under the EU system, according to an official.

A European Commission spokesman said member states “may decide between themselves” to take up more or less of a vaccine. “This is possible if it’s agreed between member states,” the spokesman said. Since AstraZeneca announced its vaccine delivery delays, the EU as a whole has increased its Moderna and Pfizer orders.

Whatever the details, Danish authorities are counting on deliveries soon ramping up. When this happens, they expect to vaccinate 100,000 people a day.

A highly organised and digitised healthcare system in Denmark is key. Aarhus University professor and virologist Soren Riis Paludan points out that on a typical day, Denmark tests 150,000 people for Covid-19. (For comparison, with a similar population size the Republic tested 105,400 people in the past week.)

A digital ID database that public authorities use to communicate with citizens about everything from pensions to daycare places will help the vaccination plan. It means authorities can sort citizens by age, and send out vaccination invitations directly to their mandatory digital inbox.

However, the Danish Health Authority warns that the target of June 27th depends on vaccines arriving as planned, and no unexpected manufacturing delays.

“In terms of infrastructure we are well prepared,” Prof Riis Paludan said. “The limiting factor is the availability of vaccines.”