Covid-19: How are other EU countries dealing with schools?

A few have moved to distance learning, with some exceptions for pupils with special needs 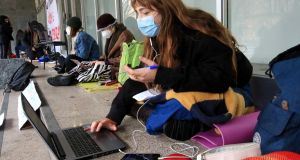 Schools in the Republic have yet to reopen this year following a spike in Covid-19 cases after Christmas.

Plans to reopen special schools and classes for pupils with special needs ran aground last week amid staff concerns over safety. It is a debate that has occurred across Europe over the course of the pandemic, but what have other EU countries decided to do?

Schools are generally closed in Germany. Local restrictions can differ between the country’s 16 states, but the central government recommended that special needs schools should remain open while others closed after Christmas. A group of teachers and staff last week launched a petition to the education minister against this exception, warning that many pupils were in high-risk categories and that staff lacked the PPE available for hospital staff. “Compliance with the hygiene rules at our type of school is almost impossible,” the letter read. The education ministry countered that if such schools were shut, parents would “face enormous challenges that they usually cannot shoulder alone”.

The Netherlands moved to distance learning on December 16th until at least February 7th. However, there are exceptions. Pupils deemed vulnerable can be allowed to attend school physically on a case-by-case basis, alongside the children of essential workers, who also have an exception. Children in the Netherlands with special needs can attend any local school, or a school tailored for pupils with additional needs. These are allowed to stay open, but some schools have chosen to close and move to distance learning. “It is a dilemma. Of course we want to welcome back our students as soon as possible,” special education school director Paul Overakker told local media. “But... with the British variant of the coronavirus around, we find that irresponsible. Safety and health come first in this case. For our students and for our staff. “

Dedicated schools for children with special needs are rare in Italy, which began phasing them out in the 1970s in favour of integrated education in the same classroom – though the level of support available can vary between schools. All schools in Italy closed last March. Elementary and middle schools reopened in September, and some high schools, but with a mix of in-person and distance learning and different circumstances across Italy’s 20 regions. In recognition that online teaching can leave out children with special needs, some schools made an exception to allow such pupils to attend physical lessons. This caused some controversy, as teaching only special needs students in the classroom went against the principle of integrated education.

Schools in France were closed from March until May and began reopening on May 12th, with occasional closures of individual schools since due to Covid-19 outbreaks. Post-Christmas closures of schools in other EU countries amid concerns about the more infectious British variant provoked a debate in France about whether it should follow suit. All children aged over six must wear face masks at all times, including in outdoor spaces, and schools must ventilate their buildings and prevent student groups from mixing. Children with special needs are “priority students” and must follow the same safety measures as other pupils wherever possible. Parents have the right not to send children to school if they wish, without being penalised.

All vaxxed up with no place to go, Londoners start to unwind the lockdown