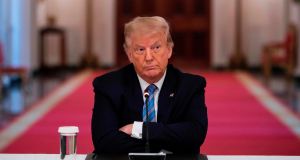 US president Donald Trump at adiscussion on the reopening of American schools. File photograph: Jim Watson/AFP via Getty Images

New cases of Covid-19 rose by nearly 69,000 across the United States on Friday, according to a Reuters tally, setting a record for the third consecutive day. A total of eight US states – Alaska, Georgia, Idaho, Louisiana, Montana, Ohio, Utah and Wisconsin – also reached records for single-day infections.

In Texas, another hot zone, Governor Greg Abbott warned on Friday he may have to impose new clampdowns if the state cannot stem its record-setting caseloads and hospitalisation through masks and social distancing.

“If we don’t adopt this best practice it could lead to a shutdown of business,” the Republican governor told local KLBK-TV in Lubbock, adding it was the last thing he wanted.

California announced on Friday the state will release up to 8,000 inmates early from prisons to slow the spread of Covid-19 inside the facilities.

At San Quentin State Prison, outside San Francisco, half of the facility’s roughly 3,300 prisoners have tested positive for the virus.

The Walt Disney Co said the theme parks in Orlando would open on Saturday to a limited number of guests who, along with employees, would be required to wear masks and undergo temperature checks. The park also cancelled parades, firework displays and events that typically draw crowds.

Florida remains one of the worst hotspots for the virus in the nation and is among a handful of states where deaths are rising, based on a Reuters analysis of fatalities in the last two weeks, compared with the prior two weeks.

On Thursday, the state reported a record 120 deaths and added another 92 on Friday. It recorded 11,433 new coronavirus cases on Friday, just short of the state’s record, and nearly 7,000 hospitalisation.

The number of confirmed US infections is over 3 million, according to a Reuters tally, stoking fears that hospitals will be overwhelmed.

More than 133,000 Americans have died, a toll that experts warn will likely surge along with the rise in cases.

Overall, coronavirus cases are rising in 44 American states, based on a Reuters analysis of cases for the past two weeks compared with the prior two weeks.

Face coverings could be made mandatory in shops in England, Boris Johnson has hinted, as he urged Britons to go back to work if they can.

The prime minister said he wanted to be “stricter” on insisting people wear mouth and nose coverings in confined spaces where they are meeting people they do not normally see.

Downing Street is understood to be looking at the issue, amid suggestions new rules could be introduced within a few weeks.

In an online question and answer session with the public, Mr Johnson said: “I do think we need to be stricter in insisting people wear face coverings in confined spaces where they are meeting people they don’t normally meet.

“We are looking at ways of making sure that people really do have face coverings in shops, for instance, where there is a risk of transmission.”

Mr Johnson said he wanted people to go back to work “if they can” as he expressed a desire for people to “lead their lives more normally”.

In Scotland, people are now legally obliged to wear face coverings inside shops and on public transport.

Welsh first minister Mark Drakeford said he did not think the evidence on wearing face coverings was “decisive” yet.

Pubs, cafes and restaurants in Wales will be allowed to serve customers indoors from the start of August if Covid-19 cases continue to fall.

Campsites, hairdressers, beauty salons, cinemas and playgrounds are set to reopen in the next three weeks, and some amateur team sports, including football, will be able to resume, the Welsh government said.

The first minister, Mark Drakeford, also made it clear that Wales was reopening to tourists, but he said he would not hesitate to close down areas such as national parks if there were localised surges in coronavirus cases.

Drakeford said visitors to Wales were welcome, but asked them to act responsibly. “Wales is open. We ask people to come to Wales and visit safely. Coronavirus has not gone away,” he said.

The government said that provided Monday’s reopening of outdoor hospitality goes well and the state of the virus allows, indoor opening for pubs, bars, cafes and restaurants will resume from August 3rd.

The Australian state of Victoria logged 216 new cases of Covid-19, in one of its highest daily increases., amid warnings the numbers would get worse before improving, as its capital city began its first weekend of a six-week lockdown.

The state’s premier Daniel Andrews told a news conference Covid-19 would be with them “for months and months”.

Victoria, home to a quarter of the country’s 25 million people, has also become the first state to ask people to wear masks with the order directed at residents of Melbourne.

The other seven states and territories, which reported just 11 new cases between them on Saturday, have banned travellers from Victoria amid concern that community transmission was causing a second wave of the virus. Authorities had previously attributed most new cases to people returning from overseas.

Australia has avoided the high Covid-19 casualty numbers of other countries after closing its borders and going into nationwide lockdown in March, with some 9,300 infections and 107 deaths.

India’s coronavirus cases have passed 800,000 with the biggest spike of 27,114 cases in the past 24 hours, causing nearly a dozen states to impose a partial lockdown in high-risk areas.

The new confirmed cases took the national total to 820,916. The health ministry also reported another 519 deaths for a total of 22,123.

A surge in infections saw the cases jumping from 600,000 to more than 800,000 in nine days. The ministry said the recovery rate was continuing to improve at more than 62 per cent.

Eight of India’s 28 states, including the worst-hit Maharashtra, Tamil Nadu and New Delhi, account for nearly 90 per cent of all infections.

The most populous state of Uttar Pradesh, with nearly 230 million people, imposed a weekend lockdown while several others announced restrictions in districts reporting major spikes.

South Korea’s Centres for Disease Control and Prevention said 13 of the new cases were in the densely populated Seoul metropolitan area, which has been at the centre of a virus resurgence since late May. Infections were also reported in other major cities such as Daejeon and Gwangju.

Fifteen of the new cases were linked to international arrivals as the virus continues to spread in Asia, North America and elsewhere.

New Covid-19 cases have dropped sharply in China, and authorities are turning their attention to concerns that the virus could spread through imported food.

Those worries have risen since a June outbreak in Beijing that was linked to the city’s largest wholesale market.

Testing has been stepped up on incoming food shipments, and on Friday customs officials said they are halting imports from three Ecuadorian shrimp producers after tests showed the virus present in recent shipments.

Authorities say the coronavirus was detected on the outer packaging of the shipments on July 3. The inner packaging and the shrimp themselves tested negative. Products from the three companies received after March 12 have been ordered to be returned or destroyed. – Agencies, Guardian