Covid-19: All travellers into State will have to provide negative PCR test 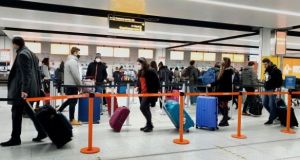 The ban on travel from Britain and South Africa is set to be extended by 48 hours, it is understood. Photograph: PA

All travellers coming into the State from any country will have to provide a negative PCR test from the previous 72 hours under new plans set to be agreed by Cabinet.

It is understood the travel ban from Britain will be lifted on Saturday. However passengers will have to provide a negative PCR test.

The ban on travel from Britain and South Africa is being extended by 48 hours, it is understood.

It was brought in originally amid fears about the new strains of Covid-19 and was due to end on January 6th, however Government sources have confirmed that the measure will be extended by two days. Sources added that the extension on travel from Britain and South Africa would now last until Friday night.

Separately the Cabinet is also expected to agree new restrictions in construction, sources have confirmed. Construction is expected to stop until the end of January with exceptions for social housing , urgent roof repairs and utilities.

The Cabinet is also expected to agree that crèches can remain open to provide childcare for essential workers.

The moves on travel comes as the latest genomic testing shows that 25 per cent of positive Covid-19 cases sampled in the State contain the UK variant, chief medical officer Tony Holohan told Ministers at a briefing today, according to Government sources.

The new variant is thought to be far more infectious, but samples up to now had suggested it accounted for less than 10 per cent of cases and may not have been responsible for the recent significant increase in coronavirus case numbers. The South Africa strain may be more transmissible.

Concerns are particularly high over the South African variant because it is not only thought to be more contagious but there are fears it could affect the current vaccines, unlike the novel strain that has achieved high prevalence in England.

In a statement Aer Lingus said it will not operate flights from Britain to the Republic of Ireland in the period of the extended ban.

The airline said it is operating flights from the State to Britain in order to facilitate the repatriation of customers to Britain and those with connecting flights in Britain.

It said customers whose flights have been cancelled will be contacted by Aer Lingus directly, and are entitled to a refund, voucher or rerouting at a later date.

Separately travellers entering the UK are to face new restrictions, a senior UK government minister has indicated, amid reports people arriving from abroad will be required to produce a recent negative coronavirus test.

According to reports, travellers will have to show a negative result from a PCR test obtained no more than 72 hours before departure, but proposals could go even further. Reports said hauliers would be exempt.