Coronavirus: US passes 250,000 deaths as Europe struggles to contain spread

Infections fall in France but continue to rise in Italy, Germany and Turkey 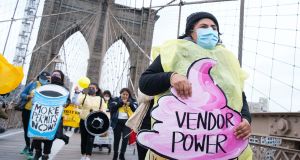 New York City street vendors march over the Brooklyn Bridge calling on the New York City Council to include street vendors in the city’s Covid-19 recovery efforts by passing a law, Intro 1116, that would lift the limits on the number of street permits. Photograph: Justin Lane/EPA.

The United States has seen more than 250,000 deaths due to Covid-19 on Wednesday as the Trump administration repeatedly fails to get a grip on the crisis.

Latest figures from Johns Hopkins University showed that the number of people killed by the virus is now250,180.

Most recently Trump has refused to concede he lost the presidential election to Joe Biden who this week said “more people may die” if he continues to hamper his transition.

More than 11 million Americans have been infected during the pandemic, by far the largest total in the world; the US also has the highest death toll, and is among the worst-hit of developed nations in terms of its death rate.

For the past two weeks more than 100,000 people have been infected every day as the country has seen huge rises in positive cases in almost every state, but especially in the midwest and Great Plains states.

Earlier on Wednesday, in a sign of the increasing lockdown steps being taken around the US, officials announced that public schools in New York City will close again, on Thursday, after the city reached a 3 per cent Covid test positivity rate.

Case rates are surging in states and cities around the country. In California this week, the governor announced he was pulling the “emergency brake” on reopening, while Los Angeles is bracing for a mandatory curfew.

Governor Koike told a meeting of virus experts that people should keep year-end parties small. New coronavirus cases in Tokyo are set to top 500 on Thursday, TV Asahi reported in a flash headline, without elaborating.

Japan’s daily Covid-19 cases rose to a record of more than 2,000 on Wednesday, according to local media tallies, while infections in Tokyo jumped by 493, surpassing a previous daily high set in August.

France reported 28,383 new confirmed coronavirus cases on Wednesday, with the weekly pace of infections again heading lower after an increase the previous day. Positive tests accounted for 16.2 per cent of all testing, down more than 3 points from a week ago. Hospitalisations and the number of severely ill patients in intensive-care units both fell for a second day, with ICU occupation falling the most since May 20th.

Deaths linked to the virus, which trail other indicators, increased by 425 to 46,698.

Italy registered 753 deaths related to Covid-19 on Wednesday, the biggest daily increase in over seven months. New daily virus cases rose to 34,282 from 32,191 on Tuesday. In the region around Milan, infections are slowing.

New cases in Lombardy fell by about 10 per cent compared to Tuesday to 7,633, which is also about 7 per cent lower than 7-days ago.

Governor Attilio Fontana has said some restriction could be eased at the end of the month if the trend continues in coming weeks.

The number of new infections in Germany is still much too high and is causing a serious pandemic situation, the head of the Robert Koch Institute for infectious diseases said, adding it is unclear how long German measures will have to remain in place.

German finance minister Olaf Scholz defended the government’s latest measures to tackle the coronavirus pandemic, saying they are accepted by most of the population. Mr Scholz spoke to Bloomberg Television after thousands of people demonstrated in Berlin against legislation approved by parliament on Wednesday that expands government powers to tackle the pandemic.

“Containing the virus is critical,” Mr Scholz said, citing polls that he said show some 80 per cent of citizens back Chancellor Angela Merkel’s ruling coalition in their efforts to stem the spread of the disease.

Turkey reported 116 new deaths from coronavirus on Wednesday, its highest daily count since April. The latest data brought Turkey’s total death toll to 11,820, according to the Health Ministry. Turkey stopped reporting all coronavirus cases in July, and has since only reported “patients” who both test positive and display symptoms. On Wednesday there were 4,215 new patients. On Tuesday, President Recep Tayyip Erdogan announced a weekend curfew between 10am. and 8pm.