Varadkar and Harris sound cautious note over unwinding of measures

Tánaiste Leo Varadkar told the Dáil pubs may remain closed beyond August 10th, the new date for the easing of the Covid-19 restrictions. 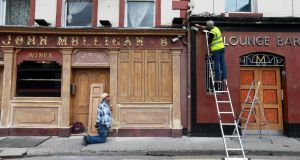 Simon Harris: We can’t presume that Covid-19 is gone because it’s not. Photograph: Alan Betson / The Irish Times

The final phase of the Government’s roadmap to unlock the Irish economy from coronavirus restrictions may be pushed out beyond August 10th, senior ministers have warned.

Tánaiste Leo Varadkar told the Dáil pubs may remain closed beyond August 10th, the new date for the easing of the Covid-19 restrictions.

He stressed that it depends “on how the virus behaves” and the numbers of coronavirus cases which were rising, he told the Dáil as he faced angry rural TDs who condemned the decision announced on Wednesday.

Minister for Further and Higher Education Simon Harris also admitted earlier that phase four of the Government’s roadmap to reopen the country could be pushed back further if there is an increase in Covid-19 cases.

The Government delayed the next reopening phase from the Covid-19 lockdown on Wednesday, postponing the reopening of remaining pubs and resumption of larger gatherings of people until August 10th.

Mr Harris said this could be further postponed if cases continue to rise but added “I would hope that not to be the case.”

“We can’t presume that Covid-19 is gone because it’s not,” Mr Harris said. The Minister also said the decision not to proceed with the next stage “increases the ability” to ensure children return to education in late August and early September.

“I think it would have been a grossly irresponsible thing to ignore public health advice, to move forward with phase four in spite of the public health advice, knowing that we have a huge body of work to do as a country to get our kids back to school and indeed get our learners and students back into third level as well,” he told reporters on Thursday morning.

Mr Harris said a “huge body of work” is being led by the Minister for Education Norma Foley to make sure schools can reopen at the end of next month. He said his department is finalising a framework for universities and colleges to reopen.

The Minister echoed Mr Varadkar’s comments on Wednesday that the recent rise in Covid-19 cases in Ireland “is not a second wave”.

“The Tánaiste is right, there isn’t an indication that there is a second wave here currently, but there are enough warning signs for us to press pause, try and bank the progress that we have made, and I suppose reignite the conversation with each other about the measures we need to take in terms of social distancing, hand washing, cough etiquette and keeping close contacts as minimum as we can,” Mr Harris said.

“As of now the indicative date is August 10th but we’ve always been very honest with people. These are indicative dates and they entirely depend on the behaviour of the virus but we are not powerless in that regard,” he said.

Mr Harris was speaking at the launch of the National Further Education and Training Strategy at Richmond Barracks in Dublin.

Mr Harris said everybody wants to protect their own health and the health of students and staff but “equally we need to get people back to education”.

“We can’t live in a country where we’ve nearly opened up everything else except our education sector. I think that would reflect very badly on our values as a country that values education and sees that the benefit of education runs far beyond just academic benefits too,” he said.

Earlier Minister for Health Stephen Donnelly said it could “materially add to the possibility of a second wave” of the coronavirus of pubs reopened now.

The Government would be prioritising the reopening of schools and healthcare facilities, the minister told Morning Ireland.

The Government has delayed the next reopening phase from the Covid-19 lockdown, postponing the reopening of remaining pubs and resumption of larger gatherings of people amid concerns over rising coronavirus infections.

Plans to allow pubs that do not serve food and nightclubs to recommence business from July 20th has been postponed until August 10th after the State’s health officials raised concerns about an increase in Covid-19 infections as restrictions have been relaxed.

Proposals to permit larger gatherings of 100 people indoors, up from 50, and 500 people outdoors, up from 200, will also not proceed as earlier planned.

Mr Donnelly also emphasised the need to get the R number down to below one. At present it is between 1.2 and 1.8, if that rate were to continue within three weeks the rate would be up to 150 cases per day, he warned.

He added that he hoped there would be no need for enforcement of wearing face covering in shops.

The Minister said that the Government is taking Nphet advice to limit gatherings in homes to no more than 10 visitors.

“It’s not 10 people, so if there’s five of you living in the house then you can be up to 15. Nphet have said for no more than four additional households which means essentially whoever lives in the house plus up to 10 people.”

He said health are worried about clusters of cases.

“What you can have is one person who is infected, but they are asymptomatic, they don’t know they are, they go to a house party, everyone’s talking loudly, there’s plenty of droplets going out into the air, you can end up with 20 to 30 people walking out of that house infected.”

Mr Donnelly said the Government did not make the decision lightly.

“But the public health advice is if we were to open now it could materially add to the possibility of a second wave and that’s just a risk we can take.”

The Government’s decision disappointed members of the hospitality industry.

The president of the Irish Hotels Federation Elaina Fitzgerald Kane said “hitting the pause button” on the relaxation of Covid-19 regulations will put thousands of jobs at risk at a time when hotel room occupancy is only 30 per cent.

The pause will also have an impact on people who had planned gatherings in hotels and wedding venues, she said.

Around 18,000 couples this year will have their wedding day plans impacted by Covid-19 with many already changing their arrangements two to three times, she added.

However, Infectious diseases consultant Corrina Sadlier has said the Government’s decision to pause the relaxing of the lockdown was the right thing to do.

She said she understood this would cause extreme difficulties for the sectors affected, but “nothing about Covid-19 has been easy for anyone”.

If the pause had not been implemented the country had been heading towards a second wave, she warned.