Coronavirus: Ireland is set to almost fully exit lockdown by end of June

Taoiseach Leo Varadkar said on Friday that the Cabinet has approved the re-phasing of the roadmap to reopen Ireland’s economy and society. Video: RTE 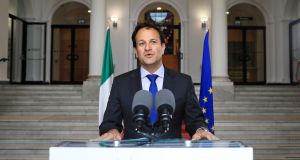 The vast majority of the Irish economy and society will reopen at the end of month as the country prepares to almost fully exit the lockdown imposed following the spread of the coronavirus.

The Cabinet met on Friday to sign off on a new roadmap which will see the majority of businesses reopen on June 29th.

From then places of worship, gyms, cinemas, restaurants, hotels, leisure facilities and hairdressers can reopen their doors alongside museums, galleries, theatres and concert halls.

All sporting activity, including close-contact sport, will resume, including team leagues for adults and children. Funding of €70 million to help the sports sector reopen was also approved by Ministers.

“This means not entering a place if you see it is packed. It means leaving somewhere, even if you are having a good time, if you have been there for too long. It means exercising judgment and self-control for your own sake, but also for the collective good”.

Most music venues can open their doors, as well as bingo halls, arcades and amusement parks. Choirs and music practice can also resume, but with strict social distancing and ideally outdoors.

Gatherings will be limited to 50 people indoors and 200 people outdoors until July 20th.

This is later due to rise to 100 people indoors and 500 people outdoors, although a further review will be carried out by the public-health team in the coming weeks.

Creches, childminders and preschools will be opened only for children of essential workers, however this will expand to include all workers on a phased basis from late July. All other children’s activities and venues will be reopened from the end of the month.

People will also be permitted to travel throughout the country, and travel to offshore islands can also resume. Those planning to travel to different counties will be asked to “acquaint themselves with the level of transmission of the virus in the relevant area”.

There will be no specific number for gatherings in private homes but the public-health team has asked that physical distancing be maintained.

Cocooning for those over 70 will continue to be recommended, the roadmap states.

In its advice to Government, the National Public Health Emergency Team (NPHET) said “the risk of a large surge of infection remains ever present and Covid-19 will continue to be a threat to the world for the foreseeable future”.

“As the public-health restrictions are lifted and there are no longer detailed rules in place imposed by the State, everybody in society will now exercise their own judgment and take personal responsibility for decisions that they make about the risk of infection to themselves and others in different situations.”

The existing ban on rent increases and evictions has also been extended until July 20th following Cabinet approval.

Minister for Health Simon Harris said that it was “unlikely” that there would be a return to the kind of restrictions previously put in place in March, while chief medical officer Tony Holohan said the NPHET would now begin to consider measures “at a national level, or below national level” should there be a spike in cases.

“It won’t be the same set of measures that we introduced in March,” he said.

Mr Holohan said he did not believe the measures were being lifted too quickly. “We think it is appropriate for where we think we are in terms of the transmission of the disease,” he said.

Mr Harris also said the National Screening Service would outline its plans for the resumption of routine cancer screening by the end of the month but that programmes would likely reopen on a phased basis over the summer.