Chief medical officer Dr Tony Holohan warned last night that Covid-19 was “not in control” and that the trajectory of the disease was rapidly deteriorating. Video: RTE 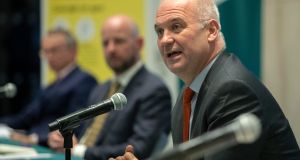 Senior Government figures are to hold a crunch meeting on Saturday to consider the recommendation from the National Public Health Emergency Team (Nphet) that the country be moved to Level 5 restrictions for a period of six weeks.

Public health officials in Nphet wrote to the Government following their meeting on Thursday to make the recommendation, after a significant increase in infection levels.

Chief Medical Officer Dr Tony Holohan said case numbers had nearly doubled and the number of hospitalised patients was growing faster than the exponential growth models predicted. Dr Holohan warned that Covid-19 was “not in control” and that the trajectory of the disease was rapidly deteriorating.

Under Level 5, people are told not to visit other people or have social or family gatherings, weddings can have a maximum of six guests and 10 mourners are allowed at funerals. Bars cafés and restaurants can provide takeaway service only, while only essential retail can open. Schools will operate under “recommendations based on situation and evidence at time”, according to the guidelines, while people will be required to stay at home and only exercise within five kilometres of home.

Friday’s news comes after the Government put three border counties – Cavan, Monaghan and Donegal – into Level 4 amid ongoing concern over the rate of infection. Household visits were also restricted to essential circumstances across the rest of the Republic, which is in Level 3 of the five-level coronavirus alert system.

Speaking in Brussels Taoiseach Micheál Martin said the three party leaders in Government would meet on Saturday with the ministers for finance and public expenditure.

“Obviously this is very serious advice. It has to be considered properly and people have to be given clarity around it,” he told reporters.

“There have been meetings this morning. I agree with Nphet in terms of the priorities we all share in protecting the vulnerable and elderly and making sure children continue to go to school.

“There are enormous economic consequences. We have just had a budget that identifies a significant deficit this year and next year. We moved to Level 3 already and also said to people no visitors to your home. We take advice from Nphet very seriously. This will get good consideration. I don’t want to put a timeline on it. We want to have situation well documented.”

Discussion with other EU countries revealed “grave situation facing Europe now in terms of a rise in case numbers”.

“Some countries seem to be moving faster on antigen testing . . . That’s significant and that’s something we have to accelerate”

“Suffice to say that [the virus] is destined to have a significant impact on the health social and economic dimensions of Europe for quite some times to come.”

On Northern Ireland, Mr Martin said: “They are two different jurisdictions with two different health systems, that has to be acknowledged and sometimes people speak very simplistically about it as though it’s a matter of switching on a lightswitch and we have one system. And because of the politics involved it is sensitive, and there is no point in pretending that it’s not sensitive”

“The UK position which Northern Ireland has been more focused towards, has not always gone along with the kind of more severe restrictions that we’ve adopted here.”

“I’d say to the people we must all reflect on our all individual behaviours, collectively reduce congregation, reduce your social contacts, behave as if you have the virus and that’s the best way to reduce the spread of this virus.”

Some ministers said privately on Friday they believed would be less resistance to a move to Level 5 due to several factors, including the progress of the disease since the last recommendation, and the lack of a shock factor associated with the latest urgings from Nphet.

The fact that the country is moving up through the levels of restrictions will also be a factor, a Minister said, as will the expansion of the essential categories of workers, which may help economic activity continue moreso than during the period of lockdown this spring.

Earlier this month the Government rejected a recommendation from Nphet that the country be moved to Level 5 with Tánaiste remarking that the advice “had not been thought through”.

On Friday Mr Varadkar said a second lockdown would be a lot more difficult than the first. He said the public would “want to know what the exit exit strategy was what the target was and at what point we would be able to achieve the [lower level again]”.

Mr Varadkar said he has yet to receive the letter from Nphet with the recommendation and would like to consider the advice, the recommendations the implications and then make a decision. He said it was unlikely that the Cabinet would meet today although there would be a meeting of the oversight committee, which is the conduit between Nphet and the Government.

Mr Varadkar confirmed preliminary work has been done on what will be entailed with a lockdown including working out an exit strategy, to allow people know what targets would be needed in order to lower levels.

He was speaking alongside Minister of State Peter Burke at an announcement of 700 jobs by distribution company, DPD Ireland, due to a 73 per cent increase of business this year.

Mr Varadkar said that numbers were going up and it looked like the situation where Dublin seemed to be stabilised no longer seemed to be the case. “A second lockdown will be difficult for people and some businesses might not survive.

“A lot of people who felt the social isolation in Spring was difficult might find it harder with darker days and the weather.”

The news of the recommendation sparked concern on Friday among Government TDs over the impact of such extreme measures. Dublin Bay South TD Jim O’Callaghan of Fianna Fáil said that going to Level 5 is not “living with Covid” and urged that Government “wake up” to the impact of the measures.

“It is, in effect, a lockdown,” he said. “In deciding what level to move to we need to consider the repercussions of moving to Level 5. It will have a very negative impact on the lives of young people and mental health.”

At some stage we have to wake up to the damage that we are inflicting on the lives of young people. Their education, employment, pastimes, entertainment and relationships have all been stopped or severely damaged by the restrictions, and they will be damaged even more by moving to level 5.”

Mr O’Callaghan said he was seeing a “pandemic of mental health issues” in the community, and said that all these factors “must be weighed up before we lockdown the country because of Covid”.

The number of cases reported by Nphet on Thursday night was, for the second day in a row, the highest daily total recorded throughout the pandemic. An additional 1,205 cases – including 288 in Dublin – brought the total number of cases to 46,429. The previous high of 1515 on April 10th included a large backlog from Germany laboratories.

The scale of infection at present is now beyond the capacity of any level of resourced contact tracing process, Dr Holohan admitted at the Nphet briefing.

With widespread community transmission it was no longer possible to “make the links” for a large portion of cases.

With the disease no longer under control, Nphet was recommending measures focused on the whole population.

If existing trends continue, there will be up to 2,500 cases a day by the end of this month, along with 400 people in hospital and up to 110 in ICU, officials are forecasting.