Trials of AstraZeneca Covid-19 vaccine remain on hold until midweek 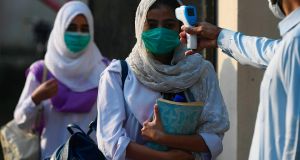 A staff member checks the body temperature of students at the entrance of the Islamabad Model College of Commerce for Girls in Islamabad, Pakistan, on Tuesday. Photograph: Getty Images

More than 29.27 million people have been reported to be infected by coronavirus globally and 926,716 have died, according to a Reuters tally.

Infections have been reported in more than 210 countries and territories since the first cases were identified in China in December 2019.

China’s coronavirus vaccine may be ready for the public as early as November, an official said, while sources told Reuters that US trials of AstraZeneca’s Covid-19 vaccine, one of the most advanced in development, remains on hold until at least midweek.

India’s tally of infections neared 5 million after the world’s second-most populous nation reported 83,809 new cases for its lowest daily jump in a week, the health ministry said on Tuesday.

South Korea will secure early supply of coronavirus vaccines for 30 million people, or 60 per cent of its population, prime minister Chung Sye-kyun told a cabinet meeting.

Australia’s second-most populous state Victoria, the country’s Covid-19 epicentre, on Tuesday reported zero deaths from the virus in the past 24 hours, a milestone not recorded for two months.

Philippine president Rodrigo Duterte vowed to prioritise buying Covid-19 vaccine to be made available by Russia or China, while taking a swipe at pharmaceutical firms of western nations asking for advance payment for their offers.

A group of scientists sent a formal letter to the Lancet outlining doubts about the accuracy of early data on Russia’s Covid-19 vaccine, one of the authors said, adding further fuel to a dispute surrounding the “Sputnik-V” shot.

The United Arab Emirates granted emergency approval for use of a coronavirus vaccine, six weeks after human trials in the Gulf Arab state started.

Jordan will suspend schools for two weeks from Thursday and close places of worship, restaurants and public markets as part of renewed restrictions after a record spike in cases in the last few days.

Seven US states have reported record one-day increases in cases so far this month even as the average daily number of new infections is falling nationally.

The US State Department eased a travel advisory for Americans considering travel to China or Hong Kong from “Do Not Travel” to “Reconsider Travel,” citing “improved conditions”.

A US federal judge ruled as unconstitutional some of Pennsylvania governor Tom Wolf’s orders to control the Covid-19 outbreak.

Covid-19 laws: What can gardaí enforce and what penalties can be given?