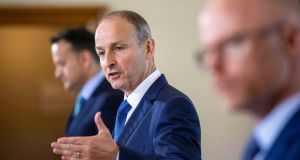 Tuesday was an important day for the Government. It hoped – and needed – to demonstrate it had formulated, and would implement, a clear and understandable plan for its management of the pandemic, the most important task facing the coalition.

It did not go well.

The Taoiseach, Tánaiste and Minister for Health spent at least some the press conference seeking to explain why the Government’s five-stage plan actually appeared to have six stages.

The single biggest requirement for the plan was that it should be clear, understandable and easy to follow – to give certainty to people and to businesses about the months ahead. But at times, Ministers didn’t seem that clear about it themselves. There was a series of halting interviews.

Minister for Health Stephen Donnelly admitted on RTÉ, “There are parts of the plan that I might disagree with”. In the Dáil, Taoiseach Micheál Martin blamed the Opposition for any lack of clarity and then stumbled through a bruising interrogation on RTÉ’s Six-One news. Donnelly told people they could travel outside Dublin; Martin said they shouldn’t.

What matters most for the Government is that the plan works, that the measures control the spread of the virus

Unlike the first phase of managing the pandemic, the reopening phase has seen Covid-19 become a point of political dispute, not agreement. The days of rallying around the flag are over. The Opposition – as is their right and obligation – is seeking to criticise and hold the Government to account for the decisions it is taking.

It was difficult to argue with Labour leader Alan Kelly when he said, “This isn’t a five-point plan, it’s a five-and-a-half point plan”. Sinn Féin’s David Cullinane was more succinct: “This is incoherent,” he said.

In fact, the plan – laboured over during a five-hour Cabinet committee meeting on Monday – wasn’t actually that difficult to understand. There are five phases, and Dublin – on the precipice of further restrictions – sits between levels two and three. There are some contradictions, but that is inevitable, as politicians jostle with public health experts over the point at which what is desirable meets what is achievable. It was in the explaining and communicating that the Government was having difficulty on Tuesday.

The grumbling among Fine Gaelers was already in full throttle in the afternoon when the news that Donnelly had become unwell and was being tested for Covid – and that the rest of the Cabinet had been told to self-isolate – was broken to the Dáil by the Ceann Comhairle. Several Ministers had not been told, and learned about the news from the media, retreating in bemusement to their offices. It brought the communications failings to a whole new level.

As Ministers and staffers alike wondered what else could possibly go wrong, the story rocketed into the international headlines. More than one reflected that you couldn’t make it up.

Ultimately, what matters most for the Government is that the plan works, that the measures control the spread of the virus. But in a crisis, communication is key, and the Government failed badly on that front.

One of Martin’s chief criticisms of Varadkar as taoiseach was that he was too focussed on communications and spin, and not enough on substance. The Fianna Fáil leader is right that substance matters most. But communications matters too. Martin could use some of Varadkar’s apparent expertise right now.