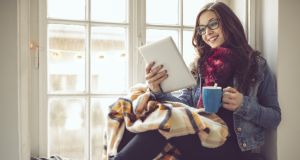 Blankets help keep the heat that your body generates close to you, while there is nothing more warming than a cup of tea. Photograph: iStock

With many of us working from home, shielding or just following the requirement to stay in our houses, it’s going to be an expensive winter if we have the heating running all day. Here are a few ways you can keep warmer, cut down on fossil fuel consumption and keep costs down.

Get to know your central heating system

With a bit of free time, you may as well busy yourself with the intricacies of your boiler and thermostat. “If you are taking advantage of not having to commute by getting up later, set your heating to come on later in the morning,” says Laura McGadie of the Energy Saving Trust, a UK organisation with an office in Belfast. “If possible, get a smart meter installed, which is estimated to help reduce a household’s electricity use by 2.8 per cent and gas use by 2 per cent.”

“Draught-proofing windows and doors, and blocking cracks in floor and skirting boards, can save around £20 a year” – that’s about €22 – “on energy bills,” says McGadie. “You can seal the gaps between floors and skirting boards to reduce draughts with a tube of sealant bought from any DIY store.” Other simple fixes include getting a cover for your letterbox and keyholes, fitting self-adhesive foam strips to draughty windows or using a chimney balloon in unused open fireplaces. A draught excluder for the door could simply be a rolled-up towel or made from an old pair of tights stuffed with fabric.

You’re probably not wearing enough clothes. Instead of thinking about putting on another pair of socks or wearing fingerless gloves at your desk, you’re “far better putting on a sweatshirt”, says JohnEric Smith, assistant professor in the department of kinesiology at Mississippi State University. “If you can keep the core – the chest and all – warm, you will keep the peripheries warm.” When your body gets colder, blood is diverted from the extremities, which then feel colder. Smith likes clothing such as fleeces, “because it creates this really thick area without much weight”, but several layers of any kind of top can create the same effect. Some people swear by thermal undergarments, and a hat will also help, but not if you’re sitting topless at your desk. “Any time you’re looking at reducing the skin’s contact with the environment, it is going to be beneficial. The idea that most of your heat is lost through your head is an old wives’ tale.” People with a lot of hair will benefit less, he adds.

“Close your curtains at dusk to stop heat escaping through the windows,” says McGadie. The ideal would be to install heavy, lined curtains but these can be hugely expensive. (Look for secondhand ones.) A curtain across the front door can be improvised with an old blanket.

If you are in the mood and able to undertake a bigger DIY job, insulating wooden floors can be fairly straightforward. “Timber floors can be insulated from below if you have access or by lifting the floorboards and laying mineral wool insulation supported by netting between the joists,” says McGadie. Otherwise, she says, “rugs and carpets are a quick fix that will help your feet feel warmer”. Socks and slippers are a given. Another tip is changing your socks. Even though you might think you’ve got them warmed up by being on your feet, in fact they hold the moisture you sweat, and that cools you instead.

If moving all the furniture and lifting floorboards isn’t an option – likewise, insulating the loft – there are smaller jobs that could help. “Installing radiator reflector panels are a low-cost option that reflect heat from the radiator back into the room, instead of letting the heat out through an external wall,” says McGadie. The Energy Saving Trust says it can’t comment on individual products, such as installing plastic film on leaky windows, but others swear by it.

Eat and drink yourself warm

“If you’re eating harder-to-digest foods – that are higher in fat and have more protein – the body is going to have to work harder, which is going to increase the body’s temperature to [fuel] those metabolic processes,” says Smith. And there’s nothing much more warming than a cup of tea. Avoid alcohol, though – the “warming” effect of a nip of whiskey is temporary and counterproductive. Alcohol causes the blood vessels to dilate, resulting in the rosy-cheeked look, which makes the skin feel warm while also causing you to lose that heat, and cool your core. So you’ll end up colder. It is also, points out Smith, “in the depressant family of drugs, so it’s going to make you more inactive and just kind of in that restful state, you may actually lose more heat from being stationary and not having as much metabolic activity”.

If you’re physically able, doing a bit of exercise will warm the body and pump blood around. Don’t do too much, though. “One thing that you have to be careful of is that, if you start sweating, you’re going to be losing your body heat faster and it will make you cold faster,” says Smith. “So you need to find that happy balance between being physically active enough that you’re generating heat to stay warm, but not to the point that you’re going to sweat to try to cool down.”

Again, this is about layers. “You’re just adding more layers between you and the environment, so it’s helping keep the heat that your body generates close to you, not having it lost into the room,” says Smith.

Maybe you need the radiator where you work to be whacked up, or a hot-water bottle or heating pad and extra blankets in bed, or a spare duvet on the sofa. If you plan to heat only one room, keep the door closed and eliminate other draughts as best you can.

If it’s sunny, make sure your curtains are open, particularly in south-facing rooms, to warm the room. Or try leaving the oven door open after cooking to allow heat into the kitchen. (Be careful if you have small children, obviously.) Finally, train the cat to sit on you at all times. – Guardian