State has leeway, but the cost of another Covid-19 lockdown would be significant 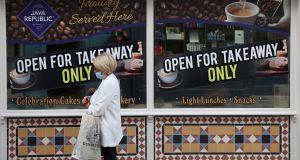 A woman walks past a cafe on Main Street, Cavan, on Thursday, as counties Donegal, Cavan and Monaghan move to Level 4 of the Government’s Living with Covid-19 plan. Photograph: Brian Lawless/PA Wire

The nine most terrifying words in the English language, US president Ronald Reagan famously said, are: “I’m from the government, and I’m here to help.” How far away those days feel now when the dominant economic philosophy was a shrinking state. Now governments worldwide have had to step in on an extraordinary scale in response to a pandemic. The big state is back. Total Irish Government spending next year, according to this week’s budget, will exceed 50 per cent of the size of the domestic economy.

The scale of the rescue programme is remarkable. State programmes offset about half of total income losses from the pandemic – more for younger, lower-paid employees – according to estimates by the Economic and Social Research Institute published on Friday. Meanwhile, business supports are unprecedented. A back-of-the-envelope calculation shows a restaurant with a weekly turnover of €30,000 or so now forced to close would get €7,500 back each week through wage supports and the new closure scheme – and get more supports via delayed tax and rate payments.

Let’s hope it allows many to survive and reopen fully in better times. But speculation now of wider restrictions ups the risks to these companies, their employees and to the exchequer. As in many other EU countries, politicians face near-impossible choices. Do they act now or risk waiting and creating prolonged uncertainty? Either way carries economic risks and costs, as well of course as the vital issue of people’s health.

We have managed to pay the bills so far, in part because much of the economy has continued to operate right through and a lot of it has done way better than expected, notably the booming pharma sector. Forecasts earlier in the year that we might have to borrow up to €30 billion have proved way too pessimistic; the expected figure is now €21.5 billion. This gives more scope if further restrictions are announced now, and to continue borrowing next year. The ECB’s bond-buying programme, which is keeping borrowing costs at historic lows, provides vital support.

So in terms of the public finances we do have a chance of getting out of this. Even the hawks of the last crisis, the International Monetary Fund, said this week that most countries should be able to carry a higher level of debt on their national balance sheets in future from the emergency measures and avoid austerity coming out of the crisis.

There are risks and we now face the most obvious one.The budget numbers were calculated on the basis that there would be ongoing comings and goings of some restrictions – but not full lockdowns. But as the numbers soar, the level of restrictions and the National Public Health Emergency Team’s call for more to be done is again on the agenda. Senior Ministers are meeting on Saturday to discuss the options.

Another severe lockdown would carry a big economic cost, as the Taoiseach has underlined. So confidence that “ we can get through this” financially has to be tempered by significant uncertainty. The risk of ongoing serious lockdowns is that there will be no momentum to economic recovery next year and the costs mount. But letting the virus multiply is not a choice either, so the question is, what level of restrictions are needed to get it under control? It is a question to which no one yet has an answer.

Already there are signs that even at Level 3, restrictions have an economic impact. Economists have spotted a stall in the recovery in September. Moves to higher levels would send the economy back into reverse and throw many back on the Pandemic Unemployment Payment – often for the second time.

A key debate now will be just what has to close if we do move to Level 4 or 5 nationwide. The framework allows employees in certain businesses to be “designated” and thus allowed to continue work. Already construction has been given a pass to continue working in the Border counties now at Level 4. There seems no reason why the vast bulk of manufacturing can’t remain open, for example. And does the entire retail sector – apart from outdoor operators such as garden centres – have to close?

If it is over sometime next year, then we can avoid a return to the austerity cuts seen during the last crisis

I expect that the Department of Finance has built some leeway into the budget estimates for this year – and next. A Brexit trade deal would be an immediate boost. But further prolonged lockdowns would deepen and widen the economic damage. No matter what supports were in place, more companies would go out of business and more jobs would be lost permanently. Whatever is decided now, wider economic confidence is now taking another hit, threatening spending and investment.

Bumps on the road

Looking through the fog now, with vaccines perhaps appearing on the horizon, it is just impossible to see where this lands. We have the resources to deal with bumps on the road and to sustain the rescue mission well into next year. Perhaps, for now, that is about all that can be said. The risks are there, too, and the longer it goes on the more they rise.

If it is over sometime next year, then we can avoid a return to the austerity cuts seen during the last crisis. This doesn’t mean borrowing is a free lunch. But it means paying the bill for the rescue mission can be delayed. The key issues are maintaining the confidence of borrowers if the crisis does drag on. And being confident that the borrowings can be refinanced in eight to 10 years when interest rates are likely to be higher.

When we exit from the crisis, another thing will be clear. All the extra emergency spending will not disappear and the State will remain a much bigger player in the economy. A major rescue programme for younger, unemployed people will be vital. And to pay for a bigger State, higher taxes will be needed. Ronald Reagan had worked that one out, too.