Toxic three-way relationship between Government, Nphet and business is not helping 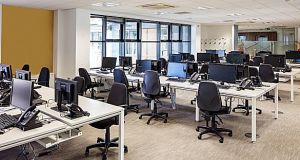 ‘I saw four people coming and going . . . if people are being pressurised to come into the office, it isn’t here.’ File photograph: Getty

Like most of the people that are lucky enough to be able to do so, I have worked from home for the vast bulk of the time since March. On the odd occasion that I have had to go into a largely empty office I have tried to cycle, to avoid public transport.

I suspect for the majority of office workers the story is the same. Many employers decided to start to open their offices over the summer as restrictions eased and have now reversed this. Some bigger multinational employers have said they don’t want to see most people in the office until well into next year.

This week chief medical officer Tony Holohan said he had heard of offices that were open and some car parks and canteens that were full. This seems to be based largely on anecdotal evidence. It is really very difficult to get any other kind of evidence, though we will come back to what there is below.

So here is my anecdotal evidence. Cycling in, the suburban roads are still busy enough. Much of that appears to be school and local traffic. But when you get towards Dublin city centre the roads are quiet. From Fairview into the city centre is normally a nightmare of buses, taxis and potholes for the cyclist. Now it is quiet – not empty, but very quiet. The local coffee shop, doing takeaways, does not have the usual queues. Numbers at sandwich spots are way down.

The day I was in recently was sunny and I sat outside between office blocks in Georges Quay – just down from Tara Street bridge – in a place usually humming with activity. The six or seven blocks around were clearly empty. I saw four people coming and going in and out of them. If people are being pressurised to come into the office, it isn’t here.

What hard evidence is there? Traffic data is hard to interpret because there are a lot of journeys for school, food shopping and the construction and manufacturing sectors are open. You can’t build an office block or work on a production line from home.

That said, CSO and Transport Infrastructure Ireland show traffic volumes at end October were half what they were this time last year and public transport volumes are down 75 per cent. Google data, which measures the numbers of people in various places shows movement around public transport hubs is down 62 per cent on pre-Covid levels. There is more movement than during the first lockdown, but activity levels are still way down.

Holohan’s comment was part of a testy set of exchanges during the week with Ibec, the employers group, whose chief executive Danny McCoy had criticised the National Public Health Emergency Team for its briefing strategy. As we move into the decision on what to do next, it is important that what happens is based on data and facts as much as possible and not on anecdotes. And while the team is not slow to throw out anecdotes – or perhaps it feels constrained from giving details in some cases – businesses and their representatives aren’t beyond interpreting the facts in their favour either , each claiming that their particular operation is “safe”.

The problem really is that there is little evidence at all. A report from the Health Information and Quality Authority (Hiqa) this week did contain useful information on the areas judged to provide the main risk, typically indoor, badly ventilated settings and especially those involving “dining, drinking, exercising, singing or shouting [and] prolonged face-to-face conversation”. But there was no detailed rankings of assessment of levels of risk in different settings.

Hiqa added that “information on superspreading events in the Irish context is currently lacking.” We know Covid-19 is spreading in households, but crucially we don’t know where the person bringing it into the house is catching it. As Hiqa put it: “Better Irish data on the source of infection and risk of transmission associated with different settings and activities would support public health education and awareness campaigns and further aid policy decisions.”

So a week out from major decisions on what to do next, we are sailing without a compass, seeing arguments between health experts, many of whom want to keep things shut and businesses who want to open them. And the lack of data of where the crucial spreading is taking place, undermines the force of the public health messaging .

Where to draw the line?

Like many other European countries, we are scrambling here. And this is not easy, nor is clear data available in all areas. You could even make the case, while it seems counter-intuitive, that given the delays in people brewing and transmitting the virus, the Level 3 restrictions had as much or even a bigger impact in the last couple of months than the Level 5 ones. Either way the numbers are not coming down as hoped for.

Yet in the increasingly toxic three way relationship between the Government,team and business, there seems little scope to try to tease this kind of thing out. We don’t even have an agreed list with the most dangerous things at the top and the safest at the bottom, based on what evidence we have. If we did, the Government would have an easier job in deciding where to draw the line.

We may not like all the answers this provides in terms of what can open for Christmas. As it is, the Government will try to do its best and in doing so will probably run against public health advice in some areas and in others will disappoint businesses which have to stay shut.

We have to get beyond the current finger pointing on all sides which is undermining the message to the public and risking a succession of openings and Level 5 closings until enough of us have the jab – which is likely to still be some time away.