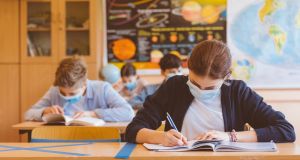 Teaching and learning are based on communication and our brains are exhausted by trying to make up for the absence of more than half of our facial cues. File photograph: Getty

I am about to break a rule all teachers who wish to retain non-teaching friends must follow: never attempt to explain school holidays. Those who teach need no explanation, those who do not will never accept one.

Worse, I am going to endorse Aodhán Ó Ríordáin’s sensible suggestion that schools should close a day-and-a-half early this Christmas. I am fully aware that such an endorsement is more likely to get me tarred and feathered than any of my reprehensible, antediluvian beliefs about social mores.

Hear me out. Students are exhausted. Teachers are exhausted. Management is exhausted. All would like to visit elderly or vulnerable relatives and friends this Christmas without worrying that they are bringing a potentially catastrophic illness to them.

Why are students exhausted? Let me talk about post-primary students, the group I know best. More than 20 years ago, a fresh-faced, enthusiastic Minister for Education named Micheál Martin set up a working group on the weight of school bags. It concluded that 12-year-olds should not carry bags heavier than 3.7kg. (8.15lbs). Dr Sara Dockrell of Trinity College did a nationwide study in 2015 which found that the average school bag weighed 5kg. I have seen students hefting bags far heavier than that, leaning forward like Dickensian children carrying coal in mines.

In locker-less schools, students are carrying those bags from class to class all day. Dr Dockrell says that carrying a well-designed backpack full of school textbooks counts as only moderate exercise. I would respectfully disagree and so would my students.

Backpacks are far from the only issue. Wearing a mask all day is exhausting but not because we are not getting enough oxygen. We are social creatures and we can read faces as fast as 17 milliseconds – but it is the whole face that we read.

The eyes have a lesser claim to be the mirror of the soul than the mouth. In 1924, a graduate student at the University of Minnesota, Carney Landis, carried out a study (one that today might have landed him in prison). He brought his unfortunate research subjects into a room (one was aged 13) and photographed them while he did things like giving them electric shocks while plunging their arms into buckets of frogs.

From these bizarre and possibly psychopathic experiments, he concluded that there are 19 different types of smile, only six of which express joy. With due respect to Landis’s credentials, I think he may have underestimated. There are smiles that express a student’s understanding of a concept and others that indicate bewilderment, for example. Those masks which are helping to save us from Covid 19mean I can see neither now.

Teaching and learning are based on communication and our brains are exhausted by trying to make up for the absence of more than half of our facial cues. Masks also muffle speech. Students get fed up of being asked to repeat themselves three times by a teacher who is 8m away from them in a classroom never designed for the purpose, but which was pressed into use because of social distancing.

Wide-open doors and windows, although necessary for ventilation, mean students and staff are freezing and struggling to compete with external noise.

Although schools appear to have relatively low rates of transmission, no one wants to be the rare positive case, particularly those with underlying conditions.

Who is ‘very high risk’?

The Department of Education only allows very high-risk individuals to work from home. Clinically stable cystic fibrosis, immunosuppression due to organ transplant, COPD [chronic obstructive pulmonary disease], emphysema, heart failure, cancer and so on are considered merely high risk and not very high risk. So an overweight 60-year-old teacher with diabetes and blood pressure, who would in many other professions be working from home, must come to school and mingle on corridors with hundreds of people.

In relation to those supposedly low school transmission rates, the anecdotes recounted this week in an Irish Times article are worrying. (Is Covid-19 testing and tracing system for schools fit for purpose?) A nine-year-old student was deemed not to be a close contact of a classmate, yet tested positive a few days later. In a separate incident a primary teacher, judged by the Health Service Executive not to be a close contact of a pupil, obtained a test privately and was positive although asymptomatic. This lack of comprehensive testing could be keeping positivity rates artificially low.

Given that, letting people off school a day-and-a-half earlier would allow people to limit their movements for a longer period, thus reducing the chances of asymptomatic people carrying Covid-19 to older or vulnerable friends or family.

Most importantly, the small concession would be an acknowledgement of how tough it is for everyone in schools right now. Not giving the concession will confirm that schools are seen as much as corrals for young people as places of education. All the talk about minding the mental health and wellbeing of staff and students is meaningless if a slightly longer break which would lift everybody is deemed to be out of the question.