Back to school: what the new classroom will look like

Classroom bubbles and hand sanitiser stations will be the norm. How do our plans compare with other countries? 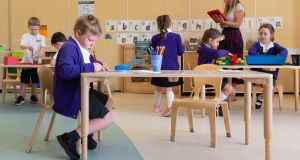 After months out of the classroom, Irish pupils are finally set to return to school in late August. The Department of Education’s plan is to fully reopen schools by creating classroom bubbles, where students have limited contact with other classes.

There will be hand sanistiser stations in each classroom, staggered drop-offs and parents won’t be allowed in school buildings in most cases, according to latest guidance. There will also be dedicated isolation rooms, in case a staff memeber or student has virus symptons, and anyone with a fever or temperature will be instructed to avoid school.

However, its plan to eliminate social distancing between pupils has caused alarm among some teachers’ unions and principals. They have accused the Government of getting ahead of public health experts and acting as if classrooms are places where staff will enjoy some “magical immunity”.

In response, the Department of Education has insisted that plans will not put the health of school staff at risk. The alternative, it has warned, is that most pupils would have to attend school part- time with a significant impact on children’s mental, social and educational wellbeing.

So, how do Irish plans for reopening schools compare with other countries who have already reopened their schools? Are any other countries taking the step of eliminating social distancing? Or will we be taking a bold step into the unknown?

Northern Ireland is set to use a 1m social distancing rule for school pupils, while England will move to a “one metre plus” rule from 4July. Scottish schools, however, are aiming to reopen full-time with no physical distancing in August if coronavirus continues to be suppressed.

The Scottish government has saidfull time schooling for all pupils is the aim the government is now working towards. However, it says this is strictly conditional on Covid-19 continuing to be suppressed and “stringent” safety measures being put in place for staff and pupils. Blended learning may still have to be implemented if infection rates rise again, it has warned.

Social distancing: 1.5m; none from August
Full reopening: May 25th

The German government is planning to end social distancing rules of 1.5 metres in classrooms and return to full class sizes from the end of the summer holidays, which is early August in some regions.

While many parents have welcomed the announcement of a return to full classes, the plans have been criticised by teachers’ unions who claim they are unworkable. In some regions, they say as many as one-third of teachers are at high risk because of their age or pre-existing health conditions. However, Germany already has examples of schools that have successfully resumed full classes.

The region of Saxony, for example, ordered primary schools to return to full classes a month ago on the basis that the risk to younger children was minimal. More than one month on, the region has yet to see any outbreaks in schools. Since they reopened in Germany in May there have been no confirmed outbreaks of the virus in schools, although some closed on a temporary basis as a precautionary step after pupils or staff contracted it elsewhere.

France last week eased strict social distancing rules which had required no more than 15 in a room and one metre social distancing. As of last week, the one-metre minimum is no longer compulsory and the “greatest possible distance” becomes the norm. Frequent hand-washing is required, assemblies will be avoided and masks must be worn by children from the age of 11. Pupils’ temperatures are being checked on entry and anyone whose is over 37.8C must be sent home.

It was one of the first European countries to reopen its primary schools in mid-April. It was seen by some as a bold experiment which risked a second wave of infections. The result?

Teachers’ unions and school principals agree that the move has been a success and early indications are that it has no significant impact on falling infection rates. Schools have strict guidelines from the government which are updated every week.

They include mandatory hand washing at least five times day and instructions that desks should be one metre apart for social distancing. Denmark’s schools started off with a two- metre social distancing rule, but this was reduced to one metre in early May. Children are also required to stay in “protective bubbles” – keeping to their own zones in the playground in small groups and sticking with the same teacher.

Italy’s education ministry is still working to establish under which criteria they will reopen from September. A definitive date for the reopening of schools is yet to be set, but when they do reopen it is likely they will aim to maintain a one-metre social distance rule in classrooms. It has also signalled that children over six will be required to wear masks, while school opening hours may be reduced and lessons staggered.

Some children have been returning to partially reopened schools since late May, but attendance has been on a voluntary basis and varies from region to region. The government recently said it was working towards the reopening of schools “for all students” in September.

Its draft plans include physical distancing of 1.5 metres between students, and masks obligatory for children over the age of six, while children aged 10 and under could be taught in “bubbles” without the need for distancing.

Many primary schools have reopened in full to children without social distancing. During breaks, pupils are required to stay in their class bubbles and play with their own classmates.

Social distancing rules of 1.5m remain in force between pupils and their teachers, between teachers themselves and between teachers and parents. At second level, it has been left up to local authorities to decide on how to reopen schools. In most cases, however, there is a condition that pupils are able to maintain social distancing of 1.5m and that there is a staggering of classes through the week.

The Dutch government’s advice is that primary children do not have to socially distance from each other. However, children do have to be 1.5 metres from the adults when in school, and the adults have to be 1.5 metres from each other. Secondary schools have reopened on a phased basis since early June, though social distancing of 1.5m still applies at this level.

Social distancing: 1m, but not mandatory
Full reopening: May 18th

New Zealand, which has similar population and school building infrastructure to the Republic, reopened its schools in late May. Its official advice is that, where possible, children, young people and staff should be far enough away from each other so that they are not breathing on, or touching each other.

This must be accompanied with good hygiene practices and regular cleaning of commonly touched surfaces. While there does not need to be a specific measurement for physical distancing, it says one metre can be used as a guide “where practicable”, particularly between adults.

Earlier this month the Department of Education announced its aim to reopen schools without social distancing.

However, the lack of publc health guidelines or detailed guidance on reopening is a source of major stress and uncertainty, according to teachers and principals.

Special schools, in particular, say the lack of any concrete plans has sparked fears over what staffing or substitute cover will be available.

De Burca is concerned that the “stay at home if unwell” policy outlined in the roadmap will result in support being removed from students with special education needs, as schools struggle to find substitute cover.

The practice of using special education teachers to provide cover in mainstream classes is not permitted under official rules.

However, schools have, in many cases, been forced to draw upon them for cover due to sick leave restrictions or lack of availability to substitute cover.

“I am vicious about how special education teachers are misused at the best of times but now, with the pandemic and the reopening of schools, principals are talking about having to poach the SET,” says de Burca.

A teacher supply panel pilot scheme was launched last year with the aim of boosting access to substitute teachers.

The pilot scheme aimed to hire 18 teachers on full-time contracts and employed by a base school. The teachers were to be available to work in the other schools participating in the substitute teacher cluster.

Some principals say an extension of such a scheme could reduce the need to take cover from special education teachers.

“There are challenges with that as well because supply panels are based on someone covering multiple schools,” says school principal, Caitriona Golden.

“Who is going to sign off on that from a health and safety perspective?”

“Staffing is going to be a huge issue now in September but they have clearly stated they would not be increasing staff levels. So how does it work?”

She says detailed guidelines around sick leave will be needed if we are asking teachers to stay at home with any symptoms they are not sure about.

“Do they need a doctor’s cert for every time?” says Golden.

Principals are also seeking guidance around advice for teachers in the “vulnerable” category who will be unable to return to the school building.

“This is a guarantee. Those guidelines should be doable now”, says Golden, “There is no reason why that is not available now.”

Similar advice is also being sought for the students.

There is also a concern among teachers that there will be an increase in the number of students requiring additional support on the return to school.