As vaccination scale-up begins, what vaccines will be used?

Should we be worried about variations between vaccine types? 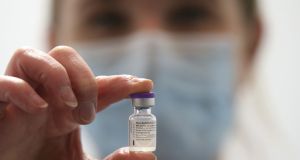 As vaccination against Covid-19 in Ireland scales up from this week, three approved double-dose vaccines will be used for people over 85, healthcare workers and those living in nursing homes.

Different vaccine types with varying efficacy rates are being deployed, but it should be underlined there are strong indications all are 100 per cent effective in preventing severe illness, hospitalisations and death.

There are some data gaps, especially on whether they prevent transmission or are effective against a range of more transmissible – and possibly more deadly – variants emerging in parts of the world. But we should get answers to this soon.

Every week new evidence is emerging about how effective these vaccines are in large populations, notably in containing the virus, whereby it causes mild disease at worst; people have smaller viral loads and so are less infectious.

The variant issue is not so clear-cut though vaccinologists are confident vaccines can be adapted to ensure particular variants do not evade vaccination.

What are the key differences between vaccine types?
The Pfizer-BioNTech vaccine is a synthetic mRNA vaccine, created from enzymes which send “messenger” RNA protein into the body with instructions to produce antigens to fight the virus.

It is a novel vaccine and will be used mainly for older people in coming weeks. It is the trickiest to handle. It has to be stored at ultra low temperatures, ie -70 degrees.

The Moderna vaccine is also a novel vaccine using the same technology. It is stored at -20 degrees but is available only in low numbers.

It has similar efficacy; in excess of 90 per cent – the percentage reduction in a disease among participants in a clinical trial. This differs from vaccine effectiveness, which measures how well a vaccine works when given to people in the community.

The Oxford-AstraZeneca vaccine will be given to healthcare workers mainly, because of incomplete data from trials, and indications (so far) it is less effective in older people. It is a “viral vector” vaccine using a modified common cold virus to provoke an immune response.

This “workhorse vaccine” can be stored in standard refrigeration. It is not only convenient in getting to less-populated areas, including homes, it is much cheaper.

Should we be worried about variations in efficacy?
The AstraZeneca vaccine has notably lower efficacy (62 per cent) with a standard, two-dose schedule. If vaccine efficacy is below a certain level, it’s not possible to achieve herd immunity – the only sustainable, long-term strategy to prevent the virus from spreading throughout the community.

Crucially, it is a perfectly good vaccine because of proven ability to prevent severe disease and no safety concerns have been identified with its use.

Have these vaccines caused reactions?
The Health Products Regulatory Authority confirmed earlier this month there were 740 reports of suspected side effects in the first month of Ireland’s vaccine rollout. These were typically associated with vaccination. “A small number” involved anaphylaxis, a serious allergic reaction. In all these cases, the people concerned recovered.

What other vaccines are in the immediate pipeline?
The Johnson & Johnson vaccine is likely to come on stream in coming weeks. It has the potential to be a gamechanger because of convenience – it can be stored in a refrigerator for months – and requires only one dose to be effective. With Ireland due to receive 2.2 million doses, this could be key to ramping up vaccination during the second and third quarters of 2021.

The Novavax vaccine developed in the US has achieved impressive trial results in the UK and ticks that convenience box. Subject to EU approval, it would be available in the second half of the year.