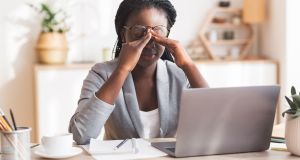 Looking 20 feet away from a screen for 20 seconds every 20 minutes can help tired eyes. Photograph: iStock

In the pandemic, our eyes are working harder than ever. With the majority of our communication nonverbal, and all but the upper third of our faces covered by masks, we are more reliant on them to express tone, emotion and even individuality, with a recent explosion in online tutorials for “mask makeup looks” emphasising long lashes, bright eyeshadows and statement liner.

Yet as we rely on our eyes to do the talking, we may also be putting them under greater strain. In June, a survey by the College of Optometrists, the professional body in the UK, found that 22 per cent of people polled believed their vision had worsened during lockdown. The reason why they might feel this way is obvious: when the mask comes off, most of the time our gaze is trained on a screen.

In the pandemic, devices are the new site of work meetings, exercise classes, socialising, school and other activities that used to take place in person, as well as the go-to means of passing the time. Nearly a third of survey respondents blamed the increase in screen time for the apparent deterioration of their eyesight.

Daniel Hardiman-McCartney, a clinical adviser with the College of Optometrists and a practising optometrist in Suffolk, says the results mirrored anecdotal reports, and the commonly held belief that devices pose a threat to our vision that must be managed. The thing is, it’s not true. “We know that screens are safe: they don’t cause any medical problems to the eyes,” says Hardiman-McCartney.

Most conditions or prescriptions become apparent in childhood. When we reach our late 30s or early 40s, we start to lose our ability to focus on nearby objects, known as presbyopia: a natural (and inevitable) part of ageing. Risk for eye-related conditions and diseases also increases with age. But, in general, from age 21, “your eyes are pretty much broadly fixed to how they will be for the rest of your life”, Hardiman-McCartney says – regardless of how much time you spend looking at screens, reading in low light or sitting close to the TV.

In fact, because it is possible to alter the size, brightness and contrast, it can be easier to read from a screen than on paper. The idea that devices cause damage to our eyes often centres on their “blue light”. In fact, tech tends to emit less blue light than the sun – and there is no evidence to suggest it is harmful. (By the same token, support for “night mode” dimmers is inconclusive.)

Rather than damaging our vision, it is the effect of the light from screens on our circadian rhythm – and the content they display stimulating our brains – that might disrupt our sleep and otherwise contribute to the sense that tech is detrimental to our wellbeing, Hardiman-McCartney says.

The best course of action is obvious: “Don’t use a device for an hour before you want to go to bed,” he says. But that “common-sense, really boring advice” does not stop us from trying to solve a tech problem with more tech. In 2015 the Advertising Standards Authority banned an advertisement by Boots Opticians for falsely claiming that “a certain kind of blue light can cause your retinal cells to deteriorate over time” to market glasses that were said to “block” blue light. “Our advice is, save your money,” says Hardiman-McCartney.

The fact that such spectacles exist (and are heavily marketed – often, tellingly, from territories outside the ASA’s purview) speaks to our deep-seated anxiety and ambivalence about our reliance on tech. This has been exacerbated by the pandemic – so it is no surprise people might believe their vision to be at greater risk too.

While it is true that there may be long-term repercussions for our eyesight, they are not what you might expect. For children, whose vision is still developing, time spent outside between the ages seven (and potentially five) and 11 has been established to protect against the onset of shortsightedness.

The reasons why are unclear, says Hardiman-McCartney. “The truth is, we don’t fully understand the underlying mechanism of myopia.” It could be a result of light intensity, physical exercise, focusing on distances further away – or perhaps a combination. But the protective effect of children spending 11 hours or more outdoors a week is well established – prompting concerns about the increased time spent indoors (and inevitably on screens) during the pandemic. If some of these changes stick – for example, remote learning or exercising at home, cutting down on time spent outside – Hardiman-McCartney says there is risk of a “myopia boom”.

“If lockdowns continue, or if we live in a world of more screen usage, it’s not about restricting it, it’s about countering it, by making sure children have more time outside,” he says.

Though they might not be at risk of doing permanent damage in the same way, adults also need to practise good habits for eye health. Minor fluctuations in our sight (with prescriptions so small as to not justify wearing glasses or contact lenses) are natural, says Hardiman-McCartney, and may with time resolve themselves. But intense use, such as poring over finely detailed plans or hours staring at small text on a screen, can exacerbate the symptoms.

“Architects or accountants might come in complaining about eye problems at an earlier level than a landscape gardener,” says Hardiman-McCartney. “It’s often about how they’re using their eyes.”

If you have noticed your sight seeming to deteriorate since the pandemic started, the answer might be simply that your eyes are tired. They are certainly likely to be working harder from home than they were at the office, with ergonomic desk setups and widescreen monitors widely replaced by laptops on crowded kitchen tables.

To reduce eye strain, the College of Optometrists advises positioning your monitor so that it is between 40cm and 76cm (roughly arm’s length) from your eyes. The screen should be tilted away from you at a 10-20-degree angle with the top roughly level with your eyes. The monitor should also be positioned so as to minimise distracting reflections and any document holders should be placed close to the screen so that your gaze can move between the two without needing to refocus.

With phones and tablets, Hardiman-McCartney’s advice is to hold them on your lap with your elbows at roughly 90 degrees, like you are reading a book. “There’s a temptation to lie down on the bed or sofa and hold it above your head – and that’s terrible for your eyes.” That is because it is less labour-intensive for our eye muscles to look slightly down than it is to look straight ahead.

If we are sitting in front of a screen for long periods, Hardiman-McCartney says, most of us don’t look away at all. “You’re staring 40, 45cm away for long periods of time, and that’s just unnatural. Our eyes aren’t set up to do that.” He advocates following the 20-20-20 rule: looking at something 20ft (six metres) away for 20 seconds, every 20 minutes – “just to give your eyes a break”. He suggests setting a timer to remind you to do so three times an hour.

His other tip is striking in its simplicity: make the text larger. “Blow things up to 125 per cent, 150 per cent – it’s much more efficient on your eyes.” Adjust the brightness, too. “These small changes can make a world of difference.”

And remember to blink. We do so less when looking at a screen, which can cause uncomfortable dryness. “If you screw up your eyes, have a big forced blink, that lubricates your eyes with a fresh layer of tear film,” says Hardiman-McCartney. “It’s a really simple, chemical-free way of helping.”

'A whole population has suddenly changed how they use their eyes'

This year ophthalmologists described widespread instances of “mask-associated dry eye”, where air exhaled into a mask is forced upwards over the surface of the eyes, evaporating the tear film (and causing glasses to fog). It speaks to the combination of “ocular and nonocular factors” that might be contributing to discomfort or differences that we experience in our vision, beyond simply increased screen time, says Hardiman-McCartney.

“Maybe it’s tiredness, maybe it’s stress and anxiety with the situation, maybe it’s acclimatising to a new world where we might not be as good about when we start and finish work. I didn’t think: ‘I’ve got half an hour to rest my eyes’ when I walked to work – but of course it’s all having an effect.”

Should there be cause for concern, Hardiman-McCartney says it is important to remember that help is available during the pandemic. Though most optometrists have remained open, the survey that showed a significant number of people who felt their vision had got worse during lockdown also found they were reluctant to seek help, due to the risk of contracting coronavirus.

“It does raise the question that a lot of people are struggling unnecessarily,” says Hardiman-McCartney. The College of Optometrists has advice for how to safely seek help for your sight during the pandemic at its website, lookafteryoureyes.org.

But as with every aspect of our wellbeing, the significance of the shift on our sight cannot be summed up by more screen time alone, says Hardiman-McCartney. “A whole population has suddenly changed how they use their eyes.” – Guardian

Pupils, teachers concerned they will not finish curriculum due to lockdown