Amsterdam Letter: The sight of sex workers in windows may become a thing of the past 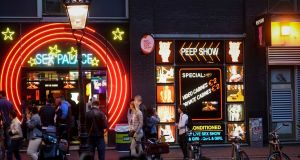 The red-light district of Amsterdam. Photograph: Kenzo Tribouillard/AFP via Getty

It took the then director of Amsterdam’s famous Rijksmuseum to say, six years ago, what nobody else was willing to say: that the heart of the ancient Dutch capital was becoming “dirty”, “sleazy” and “overcrowded”. And it has taken a pandemic to begin the complex process of reversing that decline.

Why did it take so long? Well, not everyone saw a tiny city centre jammed with tourists from all over the world as necessarily a bad thing, even if a disproportionate number were in their 20s and dividing their time between “coffee shop” highs and the steamy windows of the red-light district.

After all, at its height before the financial crash of 2008, that 6,500sq m rabbit warren of laneways, known locally as De Wallen, was reputedly generating about €1 billion a year – such enormous quantities of cash that what was taxed and what wasn’t became almost a moot point.

The problem was that while globalisation brought cheap flights, cheap hotels, and cheap thrills, it also brought overseas gangsterism in the form of Turkish, Serbian, Russian and Albanian mafia, Chinese triads, Colombian cartels and even the notorious Calabrian ’Ndrangheta.

Their arrival sparked murderous turf wars for control of the illegal drugs industry, with the bosses of the home-grown penose – slang for the Dutch criminal underbelly – and a massive increase in cross-border trafficking of young women to supply the sex industry, both regulated and underground.

Not for nothing has one of the most popular Dutch TV series of recent years been Mocro Maffia – “Mocro” being gangster speak for Dutch-born Moroccans – which chronicles the ascent of three penose teenagers, Romano, Pencil and The Pope, through Amsterdam’s cocaine hierarchy.

Although by no means all gangsterism in the Netherlands is connected to the red-light district, of course, it has come to symbolise for some the dark forces of a criminal underworld gaining the upper hand – “rotting the concrete of our society”, as one police union boss memorably put it.

A gathering mood for change was crystallised by the shooting dead of 44-year-old lawyer, part-time judge and father of two Derk Wiersum, almost exactly a year ago, as he said goodbye to his wife one morning outside their home in the capital’s suburbs. The killer was believed to have been a teenager.

Cometh the hour, cometh the woman. And so the GreenLeft mayor of Amsterdam, Femke Halsema, has been leading plans to sanitise De Wallen, in the most radical clean-up of the sex trade in decades – which may, if she gets her way, include moving brothels out of the city centre.

As in other international cities, including Dublin, the Covid-19 lockdown has provided a unique opportunity to reimagine how we may want to live our lives when the pandemic has passed, and for Halsema that means rebooting Amsterdam as a metropolis more convivial to its own residents.

There are no plans to ban prostitution, which, after all, was only legalised in the Netherlands in 2000. However, the sight of sex workers advertising themselves by standing in window-fronted rooms may well become a thing of the past.

“We want to combat the rise in human trafficking by providing a safe environment in which sex workers can run their businesses – but we also want to protect the prostitutes from a humiliating parade of gawping tourists,” says Halsema, whose office is less than a kilometre from De Wallen.

Imagining the removal of the red-light district as the city’s top tourist attraction would place cultural jewels such as the Rijksmuseum and the Van Gogh Museum front and centre in a new landscape aimed at attracting “the right visitors”, as one city planner put it.

This all depends on coronavirus. With Dutch GDP due to fall by 6.4 per cent this year and unemployment heading towards 7 per cent, property consultants say the pandemic is having “a profound effect” on retailing and hotels in particular.

Every small town in the Netherlands has many more empty shops today than it had six months ago.

The danger now is that the rush to rekindle the economy will become a headlong rush back into the arms of the familiar rather than towards the bright new future everyone’s been imagining.

And economically at least, in Amsterdam the lure of its own unique variety of “business as usual” will be a quick fix that’s hard to ignore.