Almost 300,000 essential therapy appointments missed in first half of year

Outpatient waiting lists grew by 24,000 in first six months of year as a result of Covid 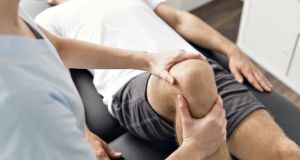 There were 101,000 fewer physiotherapy appointments than targeted in the year to June. Photograph: iStock

Almost 300,000 patients missed out on essential therapy appointments in the first half of the year, according to a new report that reveals the extent of disruption to normal health services caused by Covid-19.

There were 101,000 fewer physiotherapy appointments than targeted in the year to June, and 70,000 fewer speech and language therapy visits, the HSE’s latest performance report shows.

Occupational therapy appointments were 52,000 below target and thousands more appointments for podiatry, ophthalmics, audiology, dietetics and psychology were also lost.

Though almost every baby is supposed to have a development check at 10 months, only a quarter was getting one by the end of June. And despite a promise that no child would have to wait more than 12 months for access to mental health services, 224 were by mid-year.

By mid-year, the HSE had recorded a deficit of €1.2 billion, or more than 14 per cent of its total budget, according to the report.

Spending on Covid-19 came to almost €1.3 billion, including €670 million on support services such as procurement, €294 million on private hospitals and €137 million on hospitals.

Over 38,000 fewer woman than expected had a mammogram, and 99,000 fewer had a smear test. Even the BowelScreen programme, which does not require physical interaction, was affected, with just 22,000 tests completed out of a target of 65,000.

Another 30,000 fewer than expected patients were screened for the diabetic retinopathy programme.

Almost three out of four colonoscopy patients had to wait more than the 13-week target time for the procedure.

Outpatient waiting lists grew by 24,000 in the first six months of the year, inpatient discharges were down by 17,000 and 108,000 fewer daycare procedures were carried out.

The number of people waiting over 15 months for inpatient or daycase treatment increased by almost half in the year to mid-June.

However, attendances at hospital emergency departments and admissions from them were down by about a fifth as patients sought to minimise exposure to the virus.

Work absence is also significantly up in the health service, almost entirely due to the disease. Virus-related absence accounted for almost a third of the 7 per cent absence rate recorded in the first half of the year. In April, as the virus peaked in spring, one in 10 healthcare workers was off work.