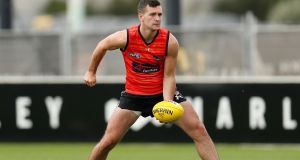 The Australian Football League’s (AFL) match between Essendon and Melbourne on Sunday has been postponed indefinitely after Essendon’s Conor McKenna tested positive for coronavirus, the league said on Saturday.

McKenna returned a “low-grade irregularity” when he was tested on Friday and again on Saturday. The second test found him positive for the virus that causes Covid-19, AFL chief executive Gillon McLachlan told reporters.

“The health department has been notified as per the protocols, and we will be working with the department and chief health officer to identify the close contacts with Conor and also to isolate them,” McLachlan said.

All of the Essendon players and the coaching group had been told to isolate, he added. They were all tested on Friday with no other positive tests. McKenna was not showing symptoms of the disease.

McKenna had returned to his native Ireland after the AFL season shut down in March but returned to Australia last month and underwent a 14-day quarantine. He had tested negative five times before the latest two tests.

The AFL resumed its season last week after nearly a three-month shutdown. The league had conducted more than 13,000 tests as part of their Covid-19 protocols. McKenna’s was the first positive result, McLachlan said.

The club’s training facility would be shut down and thoroughly cleaned, he added. “This is a reminder that we must be on our toes at all times,” McLachlan said. “We are not all through this crisis.”