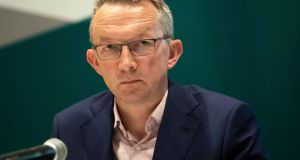 ‘I don’t accept arguments that belittle the impact of the disease and reduce the strategy to something where older people can be siphoned off safely,’ Dr Colm Henry, chief clinical officer with the HSE said. Photograph: Colin Keegan/Collins

An advertisement in The Irish Times advocating a strategy of lifting all Covid-19 restrictions while shielding the vulnerable would not work, HSE chief clinical adviser Dr Colm Henry has said.

Dr Henry said that while the facts contained in the advertisement were correct the conclusions were wrong.

The full page advertisement in Thursday’s paper was paid for by Dublin technology millionaire John Moore who owns Moorezey Holdings and who previously owned 3D4Medical which was sold last year for €45.9 million.

It said the median age of death from Covid-19 is 83, that 95 per cent of people who have died from the disease have underlying health issues and that people under the age of 44 are more likely to die in a car accident than from Covid-19.

“Surely there is another way to take care of the few who are vulnerable while letting our economy and future survive?” the advertisement asked.

It also referenced a website promoting the Great Barrington Declaration which advocates a policy of shielding vulnerable people while allowing the rest of the population to pursue herd immunity. It advocated an end to restrictions.

Dr Henry said the facts as outlined in the advertisement were correct, but its conclusion was wrong.

“I don’t accept arguments that belittle the impact of the disease and reduce the strategy to something where older people can be siphoned off safely,” he said.

“Everybody is only one degree away from somebody who has died from it.”

He said it would be impossible to protect vulnerable populations from Covid-19 when widespread community transmission happens as a result of lifting all restrictions.

He said the results of uncontrolled transmission of the virus were seen in northern Italy when its hospital systems were completely overwhelmed by the number of cases it had to deal with despite having one of the most advanced healthcare systems in the world.

“A lot of people died who shouldn’t have died,” he said.

Dr Henry also pointed out that it is not just old people who are affected by the disease as the median age in ICUs is 62.

Lockdown mid-term guide: Get over the midweek hump