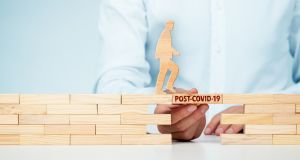 Not surprisingly, most of the focus during the Covid-19 pandemic has been on the daily number of new infections, deaths and on those needing admission to intensive care. The narrative for those with milder infection has been one of a short, acute illness with a resolution of symptoms within a two to three week period.

But now a new phenomenon has emerged: “Long Covid” is a term being used to describe illness in people who have either recovered from Covid-19 but are still reporting lasting effects of the infection or have had the usual symptoms for far longer than would be expected. Anecdotal experiences are emerging on social media and through patients’ groups.

Dr Paul Garner, professor of infectious diseases at Liverpool School of Tropical Medicine, detailed his seven-week experience with the virus in an opinion piece for the British Medical Journal, describing it as “frightening and long”.

A US doctor training in psychiatry has described her initial Covid-19 symptoms as: “a low-grade fever, profound leg pain, malaise, and loss of appetite. More than 100 days later, Covid-19 is still with me. Some days I wonder if it will ever leave.”

However, while valued in medicine, anecdote is not scientifically robust. And because Covid-19 is such a new illness, the kind of prospective, long-term research needed to determine the prevalence of a possible post-Covid syndrome is only now getting under way.

In one of the first published pieces looking at the phenomenon a team of researchers from Italy reported that nearly nine in 10 patients discharged from a Rome hospital after recovering from Covid-19 were still experiencing at least one symptom 60 days after onset. Writing in the Journal of the American Medical Association (JAMA) they found that 13 per cent of the 143 people studied were completely free of any symptoms, while 32 per cent had one or two symptoms, and 55 per cent had three or more. Although none of the patients had signs or symptoms of acute illness, many still reported fatigue (53 per cent), breathlessness (43 per cent), joint pain (27 per cent), and chest pain (22 per cent). Some two fifths of patients reported a worsened quality of life.

That there may be long term effects from infection with Sars-CoV-2 is not a surprise. According to Dr Frances Williams, Prof of Genomic Epidemiology at Kings College London, about 10 per cent of the 3.9 million people in Britain contributing to the Covid Symptom Study app have effects lasting more than four weeks. Chronic fatigue - classified as fatigue lasting more than six weeks - occurs in other illnesses, she notes. “Prolonged fatigue is well recognised after other viral infections such as the Epstein-Barr virus, which causes glandular fever. Post-viral fatigue was also seen in a quarter of those infected with the original Sars virus in Hong Kong in 2003.”

“Although we know that lasting fatigue can sometimes follow other viral infections, detailed mechanistic insight is, for the most part, lacking. An ongoing viral infection in lung, brain, fat or other tissue may be one mechanism. A prolonged and inappropriate immune response after the infection has been cleared might be another,” Williams posits. There may also be a pattern of immune system activation during the viral infection that is relevant to prolonged symptoms.

Indeed the possibility of prolonged illness from Covid-19 might soften the cough of those young people who are partying like the infection doesn’t exist.

But for the moment, a post-Covid syndrome remains a possibility rather than a probability.