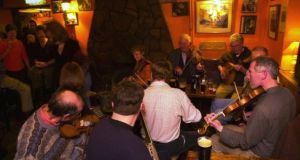 Live music events will have to adhere to social distancing rules when ‘wet pubs’ reopen on September 21st. This file imags shows a music session in a pub before the pandemic. File photograph: Frank Miller.

The National Public Health Emergency Team has recommended that new household restrictions be introduced in Dublin to address rising numbers of Covid-19 cases in the capital.

It is understood that NPHET has told the Government its preference would be to reduce the number of families allowed in any one house during visits from three to two. This measure is being proposed to deal with the high number of community transmissions in Dublin - many of the cases are caused by household clusters.

The current number of six will not be lowered, however, just the reduction in number of people from different families.

It is also understood that the team has made no recommendation that would restrict travel in and out of the capital other than new advice that people should limit their travel and not consider doing so for social occasions.

While pubs are due to reopen on September 21, NPHET has also issued a note of caution about premises in the capital saying some restrictive measures might be desirable if the numbers do not stabilise.

The Cabinet sub-committee on Covid-19 is currently meeting and will consider the advice of the expert body this afternoon. The meeting of the group, which includes Taoiseach Micheál Martin, Tánaiste Leo Varadkar, and Minister for Health Stephen Donnelly, was delayed because of a series of Dáil votes.

Sources familiar with the NPHET discussion said the sense was that the main discussion on public houses in Dublin will occur in the run-up to the proposed reopening on September 21st and the decision will be determined by levels of the virus then.

Nphet also discussed updating the guidance on visiting older people in vulnerable settings such as care homes. The thrust of the discussions on Thursday was about the situation in Dublin and not Limerick. It is not likely any new travel restrictions will be imposed preventing people from leaving the Dublin area.

Earlier it emerged that ‘wet pubs’ will be allowed to host live music when they re-open on September 21st, according to informed Government sources.

The current regulations surrounding Covid-19 do not expressly prohibit music being played in public houses. As part of a wider drive to give support to the entertainment sector, which has also been hit hard by the pandemic, the sources said the Government will not discourage live music or sessions in public houses involving small bands, or individuals.

However, all the social distancing and Covid-19 guidelines must be followed.

“We are very keen to make sure that as much activity as possible takes place and we get as big a number of musicians and performers back in operation,” said the source.

Minister for Media, Arts and Culture Catherine Martin will on Thursday name the chair of the taskforce which is being established to help the arts and culture sector adapt to the challenges of the Covid-19 pandemic.

The current restrictions on numbers attending events were not viable for the industry and were an anomaly, she told RTÉ radio’s Today with Claire Byrne show.

“I want our musicians to play, to sing again, to earn a living.”

On Tuesday, Cabinet gave the green light for all so-called “wet pubs”, which do not serve food, to re-open from September 21st, seven months after they first shut due to the Covid-19 pandemic.

They will operate under guidelines drawn up by Fáilte Ireland which designate pubs as “controlled environments” and therefore subject to strict restrictions. Most of the requirements already apply to restaurants and food-serving pubs which were permitted to open in June. However there are some new restrictions, particularly in the area of social distancing.

Ms Martin added that she fully accepted the social and economic impacts restrictions had on the arts, music and sports sectors and she wanted to see audiences back and the “turnstiles open.”

Financial supports for sports organisations were being considered as the loss of ticketing and the closure of stadiums was being felt. She said she was “more about opening up than closing down” and understood the demands on performers as she had worked in the sector and busked on Grafton Street.

Public health was central to all decisions, she said, but she felt numbers could be increased in line with what had happened abroad. “Let’s open up as safely as possible.”

She said funding for the arts sector would be available under a new arts task force along with two pilot schemes launched this week.