Coronavirus: Dublin school to close for two weeks as student has Covid-19

Closure ordered after student identified as first case in Republic 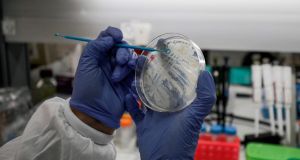 A scientist works at a laboratory in Israel trying to produce a vaccine against Covid-19. Photograph: Jalaa Marey/AFP/Getty

A Dublin school with 400 pupils is to close for two weeks after one of its students was confirmed as having the coronavirus.

The teenager, who is the first person in the Republic to test positive for the virus, became ill in recent days after returning from Italy and is in isolation in Dublin hospital.

Public health officials have ordered the closure of the school in order to minimise the risk of person-to-person transmission of the disease.

The decision was announced by the National Public Health Emergency Team on Sunday evening.

The team announced the first confirmed case of the virus in the Republic of Ireland on Saturday night. Another case was confirmed in a patient in Northern Ireland earlier this week. That woman had also travelled from Italy and passed through Dublin airport. The Dublin-Belfast train was later sanitised as a precautionary measure as it was believed the woman travelled home on it.

It is understood the risk to other pupils in the north Dublin school is considered low but the closure has been ordered on a precautionary basis. Students are being told to self-isolate at home and to indicate if they start showing any symptoms.

Public health officials plan to maintain daily contact with the students by phone, and will ask them to indicate by text whether they are showing symptoms.

Parents were being informed of the closure on Sunday evening and a helpline for affected people is being set up.

There is no justification for any other schools closing due to concerns over Covit-19, public health officials have advised. No new cases have been confirmed in Ireland today.

The Department of Health released the following statement on Sunday evening:

“Contact Tracing of the confirmed Covid-19 case, in the East of Ireland, has identified and made contact with a secondary school. The principal, staff and parents of pupils of this school have been notified. Following risk assessment, all pupils and teachers are being treated as close contacts of the confirmed case.

The school will close for the duration of the incubation period, which is 14 days.

All pupils and teachers are being asked to restrict their movements until the end of the incubation period and will receive guidance on the meaning of ‘restricted movements’.

Public health doctors will actively follow-up with all students and teachers on a daily basis over the coming 14 days.

Dr Tony Holohan, Chief Medical Officer with the Department of Health, said: “Contact tracing has assessed that close contacts of this patient includes pupils and teachers of a secondary school. Public health doctors are in direct contact with pupils, their parents and the staff involved.

“Patient confidentiality in this case, and in all cases, should be respected. The Department of Health will provide updated information as necessary.”

The general public is advised to follow advice from the HSE and the Health Protection Surveillance Centre to protect their health.