Philip Nolan eschews use of the term ‘second wave’, saying rise can be halted 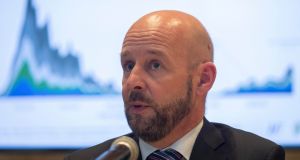 There have been no further deaths from Covid-19 in the State but 274 more cases have been confirmed, according to the National Public Health Emergency Team (NPHET).

Of the latest cases, 166 are in Dublin, which entered Level 3 controls on Saturday under the Government’s five-stage scheme for Covid-19 regulations.

Prof Philip Nolan, chair of the NPHET’s epidemiological modelling advisory group, said he did not like the term “second wave” being used to describe the recent surge in cases as it made the disease seem “overwhelming” and the rise seem “inevitable”.

The reproduction number is the expected number of cases directly generated by one case in a population.

Some 52 per cent are confirmed to be associated with outbreaks or are close contacts of a confirmed case.

A total of 52 cases have been identified as community transmission.

Outside of Dublin, the next highest number of cases was in Cork at 21. Elsewhere, there were 19 cases in Donegal, 7 in Kildare, 7 in Offaly, 6 in Waterford, 6 in Wicklow, 5 in Louth, 5 in Limerick and 5 in Meath and the remaining 27 cases were located across 12 counties.

Prof Nolan said the ban on indoor dining in Dublin restaurants and bars was justified as cases of the disease were originating in these environments before spreading to people’s homes.

While the disease was “amplifying” through community transmission in people’s households, there was “more than sufficient evidence” that Covid-19 was originating in congregated social settings such as bars and restaurants, he told RTÉ’s Saturday with Katie Hannon.

Prof Nolan said it was a “misinterpretation of the numbers” to say there were lots of cases in family homes but very few cases in other congregated settings.

“If there’s one case in a restaurant that will lead to four or five infections. That could lead to three or four households and 15 to 20 cases,” he said. There was “compelling international evidence” that indoor dining and congregation were “major drivers of community transmission”, he continued.

Prof Nolan said it was “with great sadness” that the committee had recommended the latest restrictions for Dublin but temporary closures were necessary.

While the incidence rate was three times higher in Dublin than in the rest of the country, there is “no room for complacency” outside the capital, he said. “We’re facing into a very worrying scenario... this virus, quite frankly, spreads quickly. It kills people and we really have to take it seriously over the next three weeks in order to bring case numbers back under control.”

Asked whether some NPHET members had recommended that restrictions for Dublin be raised to level 4, Prof Nolan said there was absolute consensus that “the appropriate measure for Dublin was Level 3”. He added that the “characterisation” of a discussion within NPHET, referenced in an Irish Times article, was not his experience of how decisions were made.

“NPHET gives its advice irrespective of what it thinks the reaction will be,” he said.

The Irish Times understands that some NPHET members had privately expressed concerns that recommending a higher level of restrictions could cause discord between NPHET and the Government.

Prof Nolan urged Dubliners to adhere to restrictions so restaurants can reopen in October. “We’ve shown before in March and April we can do it.”

Speaking on the same programme, Sinn Féin housing spokesman Eoin Ó Broin called on the Government to reinstate weekly meetings between the Taoiseach, the chief medical officer, the Minister for Health, party leaders and health spokespeople to keep all parties abreast of plans for Covid.

Mr Ó Broin also called for an increase in testing and tracing capacity, noting that the Government plan for the next six months had no targets for testing or turnaround time. Urgent measures were also needed to ensure people on the six month mortgage moratorium did not fall into a second month and go into mortgage distress, he said.

The Government should “reconsider the issue of temporary bans on rent increases and evictions and notice to quit, particularly where there’s potential for further restrictions as we have now,” he said.

Minister for Housing Darragh O’Brien said the Minister for Finance and Minister for Public Expenditure were in “regular contact” with banks around mortgage discussions while the Government was adding to housing capacity, including emergency accommodation, as part of its winter plan.

On hospital beds during the winter months, Mr O’Brien said the number of critical care beds had doubled since the start of the pandemic and additional capacity was available.

Social Democrats co-leader Róisín Shortall also warned of “problematic” testing and tracing programmes and said it was not sustainable to keep locking down certain parts of the country every time there was a surge in the virus.

Further detail was needed as to where the virus was being transmitted she said, including data on its spread on public transport, at sports events, in workplaces, bars and restaurants, or through foreign travel.