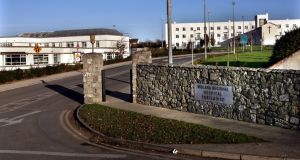 Twenty-one children were admitted to the adult ward of a psychiatric unit at the Midland Regional Hospital in Portlaoise over the course of 18 months. Photograph: Matt Kavanagh.

Twenty-one children were admitted to the adult ward of a psychiatric unit at the Midland Regional Hospital in Portlaoise over the course of 18 months.

The psychiatric unit was found to be non-compliant in 14 different areas when an unannounced Mental Health Commission inspection took place on December 8th, 9th and 10th last.

Between June 2014 and December 2015 a total of 21 children had been admitted to the adult psychiatric unit of the hospital.

There were two children resident in the approved centre during the course of this inspection and one child was admitted on the final day of the inspection in December.

The clinical files of these children found age-appropriate facilities were not available in the adult ward for the children who had been admitted.

In a report in 2011, the mental health commission – the national watchdog for psychiatric services – said by the end of that year there should be no more admissions of children under 18 to adult units.

Inspectors expressed concern at the duration of a number of seclusion episodes of patients.

In a statement, the commission said it was expecting “a lengthy report from the approved centre on the issues raised within the next week.”

“If this report is not adequate, the Mental Health Commission will escalate its enforcement further,” it said, adding that “the commission also has within its power to remove this approved centre from the register, which in effect will close the centre.”