College rejects claims that Bahrain outpost is not fit for accreditation 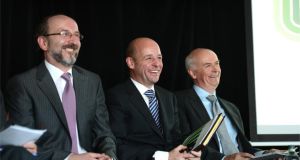 Prof Cathal Kelly (far right), who rejects accusations the RCSI’s Bahrain campus is not fit for accreditation by the Irish Medical Council due to abuses that have taken place in Bahraini hospitals where RCSI students receive training

The chief executive of the Royal College of Surgeons in Ireland (RCSI) has told his staff that the college rejects accusations that its Bahrain campus is not fit for accreditation by the Irish Medical Council due to abuses that have taken place in Bahraini hospitals where RCSI students receive training.

Prof Cathal Kelly made the remarks in an email sent to RCSI staff yesterday following the publication of a report by Ceartas (Irish Lawyers for Human Rights) documenting what it said were “systematic violations” of international human rights law and medical ethics at medical facilities where RCSI students are trained. Ceartas argues that the RCSI-Bahrain fails to meet standards for accreditation by the Irish Medical Council.

The RCSI’s operation in Bahrain has been embroiled in controversy since early 2011 when scores of medics, including three who had trained at the RCSI campus in Dublin, were rounded up as Bahraini security forces tried to quash pro-democracy rallies.


Crackdown
The RCSI was criticised for its failure to take a public stand against the crackdown which, as an international investigative commission later confirmed, involved serious human rights abuses by the Bahraini authorities.

Ceartas noted that its report echoed concerns raised by several human rights groups over the “militarisation” of healthcare in Bahrain since the 2011 unrest.

In his email to staff, seen by The Irish Times, Prof Kelly acknowledged that a significant proportion of Bahrain’s medical system is operated by the country’s defence forces, but he said the RCSI had “no evidence whatsoever” that there is ongoing ill-treatment of patients.

“We have many very senior Irish doctors and other medical personnel working in these hospitals, and neither our staff, nor our students, has reported anything of this nature.”

He said the RCSI was not aware of any ongoing persecution of medical personnel. “Of the doctors associated with RCSI, one doctor remains in prison with a five-year sentence.

In the last two years, RCSI has made formal representations, and written to King Hamad, asking that all outstanding charges be dropped and urging the release of all prisoners,” he wrote.

Prof Kelly acknowledged that there had been a polarisation of the medical profession in Bahrain and of Bahraini society more widely since 2011. “RCSI is doing everything possible to overcome this through providing medical education in a strictly non-sectarian environment,” he wrote.

“There are very few health services where there are not some instances of poor outcomes – in a deeply polarised society, these can easily be interpreted as deliberate. We can find no evidence of systemic maltreatment of patients in Bahraini healthcare facilities.”

Prof Kelly argued that in a situation where there has been “significant polarisation” it is “likely that there [are] elements of discrimination”.

He added: “After the trauma that Bahrain went through in 2011, it will take time to resolve these issues.”

“We, however, educate students of all backgrounds and actively promote and insist on a harmonious and inclusive multicultural learning environment within our university in Bahrain.”