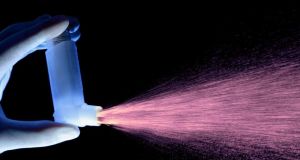 Air pollution levels in smaller towns not covered by the ban on smoky coal exceeds accepted EU limits, according to new research*.

The level of particulate matter, which has been linked to respiratory diseases and cancer, soars at night during the winter due to the burning of solid fuels.

Air pollution in Killarney, Co Kerry, is 10 times higher during winter nights than it is during the day, according to preliminary results from research by scientists from University College Cork (UCC).

Killarney was chosen because it is not one of the 20 cities and towns covered by the ban on the sale of smoky coal, which was introduced in 1990.

The Asthma Society yesterday called on governments North and South to introduce an immediate all-Ireland ban on smoky coal.

It said the measure would save up to 2,000 lives a year because of reduced rates of cancer and respiratory diseases.

However, Dr Wenger said a ban on smoky coal alone may not be enough as peat and wood also produced similar amounts of particulate matter when burned.

Air quality in Ireland was generally very good, and the ban had reduced pollution levels in many towns and cities.

“However, particulate pollution remains a problem in many areas, especially during winter months.”

There was no safe level of such pollution, he warned, and there was clear evidence of health benefits if levels were reduced.

This compares to an EU limit of 25 µg/m³ and a World Health Organisation (WHO) limit of 10 µg/m³.

Particulate matter comprises tiny airborne particles that can enter the respiratory tract and, if small enough, penetrate deep into the lungs.

In the short term exposure can aggravate asthma or respiratory symptoms, and in the long term lead to death from respiratory cardiovascular issues or lung cancer.

The WHO has estimated exposure to small particulate matter reduces life expectancy by nine months.

Dr Wenger said other strategies need to be investigated such as a switch to cleaner fuels such as gas or the greater use of stoves.

“It’s not just what fuel we burn but how we burn it.”

Minister for the Environment Alan Kelly said his department was working on initiatives to consider how best to bring about a shift to cleaner, more sustainable fuels for heating.

“While we all think that a fire makes a home cosy it is a source of air pollution.”

Researchers have estimated 8,200 lives have been saved as a result of the ban on smoky coal which was introduced by former Progressive Democrat minister Mary Harney in Dublin and later extended to other large urban centres.

The Asthma Society said Ireland had the fourth highest prevalence of asthma worldwide.

One in 10 adults and one in five children has the condition, which causes an average of one death a week.

The Environmental Protection Agency said research on the relative contribution of various solid fuel sources to particulate matter concentrations would be ready for publication at the end of 2016.

The WHO says air pollution kills 10 times as many people in Europe as traffic incidents.

*This article was amended on Thursday, December 4th.