Accept it's hard but do it anyway 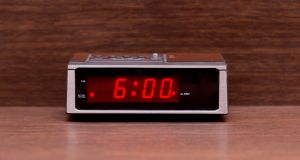 RUN CLINIC: Shock yourself into the early-morning routine with a screaming alarm that’s left out of reach, writes RUTH FIELD

I AM training for a 10km and can get myself out of the door no problem on the weekends, but during the week the only time I have to run is before work. I have been setting my alarm for 6am each day only to turn it off and go back to sleep. Any tips on how to summon up the extra grit to get myself out of bed? It is dark and raining most days now and it all feels too much like hard work.

Keeping fit and healthy through a committed exercise routine is always hard work. It is hard in the summer when we would rather be doing anything else – fancy a beer in the sun anyone? – and hard in the winter when the hours of daylight fade away and all we want to do is curl up on the sofa or under our duvets and hibernate until spring.

Accepting that it is hard is the first obstacle to get over. How? By simply sucking it up. Life is hard. Hard is the new black, remember? You have made a commitment to entering this 10km race and you need to train yourself by running at least three times if not four times per week which means you have to go at least once during the week at 6am. Thank your lucky stars that your job doesn’t require you to set your alarm for 5am.

Others are setting alarms at 4am to squeeze in their runs. Think Michelle Obama and start channelling some of her inner grit.

I do have some sympathy, as I remember having to wake at 5.30am during the winter months when training for a marathon many years ago and it is tough. But once I got into the habit of it, using the duvet decoys listed below, it just became part of my routine.

I started to get so much out of running before work, that the benefits far outweighed the grit required to haul myself out of bed at such an ungodly hour. The trade-off was more than worth it. Once you have managed to push past the temptation to curl up under the duvet when the alarm goes off, you will never look back because an early morning run really is the motherlode.

So the first thing to do is to accept that you are never going to hear your alarm and “feel” like jumping out of bed and going for a run. But run you must so try implementing these duvet decoys:

1.Set your mobile phone alarm ring tone to the most gritty in-your-face sort of wake-up call rather than a gentle progressive one. Shock yourself into action.

2.Leave said alarm out of reach of the bed so you have to get out of bed to turn it off quickly or risk waking everybody else in your street. Getting out of your bed is nine-tenths of the battle.

3.Have your running kit, bra, knickers, socks – the whole shebang – laid out ready the night before so you can slip into all your clothes without so much as a second thought.

4.Head straight out of the door via the sink for a glass or two of water.

I found that I was still half asleep during this process, which worked well for me as before I could question the insanity of getting up so early, the run had begun.

Nothing compares to running through the break of dawn, you will feel so proud of yourself all day and you will feel unbelievably good when you arrive at work. Running during these colder months will also help to keep colds, flu and general winter malaise at bay, and those endorphins will help cheer you up when you are most in need of a laugh. Plus, regular winter running will have you looking incredible for your Christmas office party in the tightest LBD you have ever managed to squeeze yourself into.

Think of all those Christmas treats: the mince pies and mulled wine that you can devour without a trace of guilt. And, you will start 2013 incredibly focused and in great shape. This is why people do it. Not for the love of the sport. And certainly not for the love of waking up at the crack of dawn. We do it for everything else it buys for our lives.

The Grit Doctor says: Breakfast has never tasted so good.