A doctor writes: medical benefits of cannabis beyond doubt 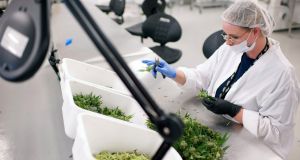 Cannabis has been shown to reduce pressure in the eyeball that leads to glaucoma. Photograph: James MacDonald/Getty

Preparations of the leaves and resin of the cannabis plant have been in use for more than 2,000 years.

First introduced into western medicine in the mid-19th century, cannabis was prescribed in the past for a diverse range of complaints including anxiety, arthritis and rheumatic disorders, migraine and painful menstruation. A cannabis derivative, nabilone, is effective in treating nausea and vomiting brought on by chemotherapy treatment in cancer patients. The benefits of cannabis in patients with multiple sclerosis (MS) have been well described. It reduces muscle cramps and relaxes bladder and bowel sphincters. And it has been shown to reduce the pressure in the eyeball that leads to glaucoma.

Cannabis contains two chemical compounds of medical interest: tetrahydrocannabinol (THC), the psychoactive ingredient in marijuana/cannabis that leads to the “high” sought by recreational users of the drug; and cannabidiol, or CBD, a non-psychoactive component that has been shown to have a number of therapeutic benefits.

Notwithstanding the legalisation of medical cannabis use in a growing number of US states, at a federal level cannabis and its derivatives remain Schedule 1 drugs, which precludes their prescription by doctors who operate under a federal medical licence. So legal users often obtain the drug without a prescription; medics who prescribe it risk losing their licence to practice.

However, before doctors here will prescribe it and other cannabis products, specific legislation will need to be passed. Even then, many doctors would want to see evidence from robust medical trials of its effectiveness for treatment of various conditions.

Cannabis is not without side effects: short-term memory can be impaired, and concentration and co-ordination are disrupted. In rare cases it can induce psychosis. Regular users may become apathetic and neglect their work and appearance. Changes in perception and sense of time produced by cannabis can be dangerous when driving. And of note for those with epilepsy, cannabis can increase the drowsiness associated with anti-seizure drugs.

However, if prescribing cannabis became legal here, some doctors would weigh up the risks versus the benefits in a case such as Ava’s and conclude that the risk to her life of up to 16 seizures a day was greater than any potential side effects of CBD oil.

Nearly half of passengers arriving into Ireland yesterday were on holiday - Taoiseach 20:43
Pay dispute talks between Government and public health specialists to continue 20:37
Sharp increase in the number of Covid-19 family outbreaks 20:19
Varadkar says up to 100,000 vaccines a week expected from April 20:05
Jim Allister says NI protocol points towards push for united Ireland 19:35