A cookbook with some special ingredients

Domini Kemp and Patricia Daly’s ‘Ketogenic Kitchen’ is based on a low carb, high fat approach 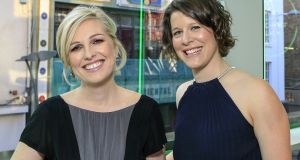 Chef Domini Kemp and nutritional therapist Patricia Daly: ‘The more we discover about keto, the more we realise what potential it has to make a difference’, says Daly. Photograph: Conor Ó Mearáin

It is an ordinary Dublin day where ordinary things are happening and I am having coffee with two women talking about ordinary things. Except chef, author and businesswoman Domini Kemp and Patricia Daly, a nutritional therapist, are anything but ordinary.

Both are cancer survivors and bonded over a shared love of trying to figure out what they could do to try to battle cancer through their diet and exercise, as well as conventional treatment. Out of something wretched came something quite special, their new cookbook, The Ketogenic Kitchen.

Kemp is used to press interviews for her own cookbooks, but this is the first one she has co-written in what she and Daly jokingly call “their arranged marriage”. They are friends, and laugh and chat with ease and respect; an unseen hum of a connecting melody and deep bond between them.

Daly was diagnosed with a malignant melanoma of the eye in 2008. Following her cancer diagnosis, she left her corporate career and started studying nutrition, specialising in integrative cancer care.

“Back then I was working as a corporate banker and knew nothing about health. I had never been sick and even when they told me ‘malignant melanoma’, I didn’t actually make the link that it was cancer until I was given a leaflet, Eye cancer for patients. I had really rough treatment.

Under general anaesthetic, they stitched a radioactive plaque to the back of my eye, turned my eye around and put it back in.

After four days, the plaque came back out under another general anaesthetic.

“I felt so crap. I asked my oncologist what could I do myself to help and was told ‘Nothing, just go back home and back to normal.’ I knew being diagnosed with cancer at 28 meant there was no way I was going back to that life. I had to change something.”

During her own research she came across the ketogenic diet and, in 2012, with her vision almost gone and the risk of losing her eye ever-increasing, she decided to go “full on keto”.

“I knew I had nothing to lose but my eye. A few weeks later when I went back to my consultant, he said, ‘Wow, it looks like the calm after the storm.’ The side effects from treatments had settled down and my vision started to come back.”

Kemp was diagnosed with breast cancer in 2013 which required chemotherapy, a mastectomy and radiotherapy. During this time she became frustrated with the healthy eating leaflets she saw being offered so started doing her own research.

“It was all based around the food pyramid and I think it’s fair to say that things have moved on quite a bit. I read as much as I could about diet, exercise and cancer and started to tweak what I was eating to what felt right for me.”

Kemp waited until she had finished chemotherapy before booking an appointment with Daly.

“We immediately bonded over our mutual frustration. She just spoke so much sense. It can feel almost like a hangover after chemo and you might be tempted to sit on the couch and eat loads of junk food, which is totally understandable. But my frustration was I thought I could be more proactive myself during treatment with diet and exercise.

“The frustration of that, meeting Patricia, herself having gone through cancer twice, and both of us thinking there must be something we can do led to the cookbook.

“We also received so much encouragement from friends and family that eventually we came to the same conclusion that people needed an up-to-date resource where they could find out about following a low- carb diet that could progress towards a ketogenic diet, with lots of nutritional information about which foods to eat, which foods to avoid as well as options for when you are going through treatment and feeling poorly.”

“Many studies and well-respected researchers have shown how cancer cells thrive on glucose. It’s their favourite food. Our body works a bit like a hybrid engine; we can either burn sugar or burn fat for generating energy.

“Nutritional ketosis means the body uses fat instead of sugar as the main energy source. Cells make that switch and this has a range of metabolic changes. Blood sugar levels will stabilise at a lower, steady level, which has many effects on overall health and wellbeing but has also been shown to enhance effects of conventional treatments. The missing calories are then replaced with fat in the form of oily fish, avocados, olives, coconut products and also fatty cuts of meat.

“Cancer cells do not know how to metabolise fat in an effective way but they know exactly what to do with sugar. That is why the PET scans work so well because radioactive glucose is injected and the oncologist will see the cells which are metabolically more active.

“The likelihood is that these are cancer cells because they multiply rapidly, need fuel and, therefore, gobble up sugar at a much higher rate. Oncologists are using the underlying science of the ketogenic diet in diagnostics but not for management,” says Daly.

Kemp says she does not understand the reluctance by some doctors to acknowledge the link between sugar and cancer cells. “Maybe it is too simplistic to say ‘sugar feeds cancer’.

“Fair enough, it is more complex than that but the bottom line is cancer cells seem to require a lot more glucose than regular cells, and seem to thrive on it and do not seem to thrive as well on a diet that is fat-based.”

If someone implements a ketogenic diet in a safe and effective way, Daly says it has wide-ranging effects on cancer cells but also on wellbeing including better mood and focus, improved digestion, more energy, reduced cravings and clearer skin, possibly because of good hormone balance.

Kemp says they both feel strongly that the diets they followed helped support their systems during a difficult time. But they are very clear that their diet and lifestyle changes did not cure cancer and are not advocating you forgo traditional treatment for a ketogenic diet.

In the book, they write: “First and foremost, the benefits of a ketogenic diet have been shown when it is used alongside conventional treatments.

“There is no data to suggest that the diet by itself can treat, cure, maintain or manage cancer...the preclinical data is compelling but this data is for animals. and is case study based”.

“The ketogenic approach is complementary to other therapies and should not be considered an alternative or standalone treatment,” emphasises Daly.

Kemp’s diet is now low carb but she has gone with an 80/20 approach. “I run food businesses and have to have that flexibility, so I embrace leafy greens and good fats, including natural saturated fats, keep my protein moderate and really watch the amount of carbohydrates I eat.”

Is the medical world embracing this diet? “The ketogenic diet has been used for centuries in the management of uncontrollable epilepsy and many studies have shown that it’s a safe approach (Studies include Groesbeck, Bluml and Kossoff, 2006).

“When it comes to other diseases, we’re only just at the beginning of obtaining “hard data” from clinical trials.

“We actually already have a considerable amount of evidence in the form of laboratory and pre-clinical data and new studies appear on almost a weekly basis. It’s such a rapidly evolving field now that it can no longer be ignored,” says Daly.

Both women are keen to emphasise that this is no fad diet. There is no insta-Kardashian filtered outcome promised with this cookbook, nor would Kemp and Daly want you to think that. This is something that could help you if you are looking for support during cancer treatment.

“As Dr Dominic D’Agostino, from the University of South Florida, recently stated, the ketogenic diet is anything but a fad diet but a very powerful metabolic therapy. I actually don’t like calling it a ‘diet’ because it is so much more than that.

“The more we discover about keto, the more we realise what potential it has to make a difference,” says Daly.

They sit in front of me like sisters with a secret, having gone through an experience and fought it with guts and fervour. The level of pain, sickness and anguish both have gone through, while permeating their lives, has not ebbed their bright spirits and I leave in awe of these women who remain very much ordinary about their extraordinariness.