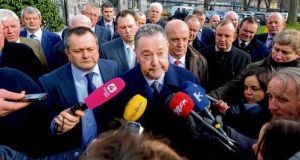 The largest group representing Garda members has said it is “extremely annoyed” at suggestions by the Government that it had ever been included in talks on extending the Cork Park agreement.

“We were never involved in pay negotiations,” said Garda Representative Association (GRA) general secretary PJ Stone. He was apparently referring to Minister for Justice Alan Shatter’s repeated insistence the GRA and Association of Garda Sergeants and Inspectors should return to the talks.

Mr Stone said the GRA had only ever been involved in “briefing sessions” and had not been involved in the talks proper. Garda bodies are representative groups not unions so cannot play a full part in any official negotiations around pay and conditions.

Mr Stone made his comments after he and the GRA’s national executive met Garda Commissioner Martin Callinan for talks at Garda Headquarters, Phoenix Park, Dublin, yesterday.

The meeting was arranged so the association could outline the financial hardship already being experienced by gardaí nationwide.

Mr Stone described it as “a very serious exchange of views” and one that had “moved” the commissioner and given him “food for thought”.

He insisted a planned Garda protest over pay cuts from tomorrow would go ahead despite yesterday’s talks.

Gardaí will refuse to use their personal phones, laptops and cars and some are expected to refuse to work overtime on non-public duties at events such as music concerts and sporting fixtures.

Mr Stone said the protest was not intended to disrupt policing and he did not believe there would be disruption. However, it was aimed at sending a signal to Government that gardaí would take action if their pay was further cut and that such action would escalate if needed.

While it was illegal for any Garda member to induce another into industrial action, Mr Stone said he was “not afraid” of leading his members, who were at their “wits’ end”, down a path of protest action.

He said that the commissioner needed to cease saying publicly that the Government had given him all the resources he needed to provide effective policing, when the reality was different.

“The Government have already left the commissioner short in this year’s budget for the payment and provision of wages.

“So it baffles us when we hear then from the Garda Commissioner about the adequate resources available to him.”