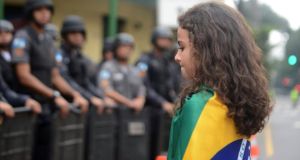 A girl stands in front of riot police while they block the road to Maracanã stadium during a protest in Rio de Janeiro yesterday. Photograph: Reuters/Lucas Landau 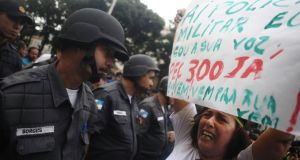 A woman protests in front of riot police during a protest on the streets near the Maracanã stadium in Rio de Janeiro yesterday. Photograph: Reuters/Lunae Parracho

Further protests marked the end of Fifa’s Confederations Cup yesterday with demonstrators attempting to reach the Maracanã stadium in Rio de Janeiro ahead of last night’s final between Brazil and Spain.

The two-week tournament – a dress rehearsal for the World Cup next year – has been overshadowed by the biggest street demonstrations seen in Brazil for several decades.

Though largely peaceful, several rallies saw clashes between marchers and police and at least five people have been killed and hundreds injured since the protest movement started early last month.

The demonstrations were sparked by increases in fares on public transport but quickly included criticisms of the government’s spending ahead of the World Cup and summer Olympics in 2016. Fifa has also emerged as a target of protesters’ anger, especially the soccer body’s demands that Brazil alter its laws to protect sponsors and exempt tournament revenues from local taxes.

Many of yesterday’s protesters promised that unless Brazil’s government implemented major reforms they would return to the streets during next year’s World Cup.

“As a patriot I cannot support the World Cup being held here. You do not build a dignified country with samba and football,” said Nelson Couto. “Until we have a proper metro system, proper schools and hospitals and our politicians stop lying we are going to keep protesting.”

Protesters also rallied in the north-eastern city of Salvador where earlier Italy played Uruguay in the third-place play-off game.

Brazil’s President Dilma Rousseff was not expected to attend last night’s final in Rio, reportedly cancelling her participation in the closing ceremonies to avoid a repeat of the intense booing she was subjected to at the opening ceremony in Brasília two weeks ago.

Ms Rousseff has seen the approval rating of her government plunge by 27 per cent since the unrest started to just 30 per cent according to an opinion poll published Saturday.

Until recently she was one of the most popular elected leaders in the world and the poll is the strongest evidence yet that the protests pose a serious threat to her hopes of re-election next year.

The president has unveiled a package of measures but her plans for political reform designed to root out corruption have run into difficulties.