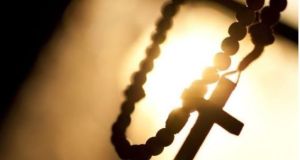 Constituencies, all outside Dublin, raised €180,000 in the church gate national collection last year

There is a “lot of resistance” in rural Fianna Fáil constituencies to ending the traditional national church gate fundraising collection, the party’s ardfheis has heard.

The collection remained a “very strong income stream where it is organised well”, party finance director David Burke told delegates at a session on Fianna Fáil’s accounts for 2016.

Constituencies, all outside Dublin, raised €180,000 in the church gate national collection last year, a similar level to 2015, mainly in rural areas.

Over the years the practice has proved controversial and has been criticised by churchgoers and Catholic Church authorities.

But at the weekend delegates defeated, without debate, a Westmeath motion that the ard comhairle (national executive) should “review the church gate collections and recommend alternative methods of fundraising”.

Delegates were told that the party is restructuring how it fundraised, particularly in Dublin, where the tradition is weak.

But there are no plans to move away from the practice. In constituencies “that derive an awful lot of income from it, there is a lot of resistance [to stopping]. There are discussions around it but it is still a very strong income stream where it’s organised well,” the finance director said. Constituencies receive 40 per cent of the collection and that helps fund the local organisation including elections.

“The draw over five years raised €2.6 million. Each ticket is €50 and that’s how we service the debt and run elections,” Mr Burke said.

The party received total State funding of €5.3 million, up from €3.98 million the previous year because of its success at the general election, more than doubling the number of TDs from 20 to 44 and also increasing its Seanad representation to 14.

There are three sources of State funding – the parliamentary activities account, formerly the leader’s allowance; funding through the Electoral Acts; and finance from the Houses of Oireachtas Commission for Leinster House.

Following a change in the law political parties are required to put their annual financial statement in the public domain and Fianna Fáil said it “pro-actively” published its accounts in the ardfheis clár or programme ahead of its publication in due course by the Standards in Public Office commission.

The finance director told delegates: “We welcome the fact that it brings transparency to finances and we’ve been very much in line with all regulation.”

She said the “key challenge for our finances is to maintain our fundraising ability and increasing it where possible”. Limerick county raised almost €20,000 in its church gate collection and €31,150 in the super draw.

3:34 Which issues will dominate the election?

0:20 Homeless man in serious condition after tent lifted during canal 'tidy up'