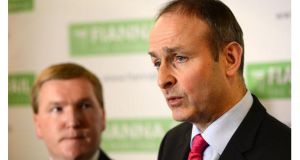 Fianna Fáil has recovered ground to become the biggest party in the State, according to the latest Irish Times/Ipsos MRBI poll.

The poll was taken on Monday and Tuesday of this week before the landmark deal on the promissory notes.

Fianna Fáil has gained five points since the last Irish Times poll in October, while Fine Gael has dropped six and Labour has dropped two points.

Satisfaction with the Government is down three points while satisfaction with Taoiseach Enda Kenny has dropped four points, bringing him level with Fianna Fáil leader Michael Martin.

The survey was undertaken among a representative sample of 1,000 voters aged 18 and over, in face-to-face interviews at 100 sampling points in all constituencies. The margin of error is plus or minus 3 per cent.

Satisfaction with the Government and the Coalition leaders has dropped to its lowest level since they took office in March 2011.

The Government’s satisfaction rating has dropped three points to 18 per cent while satisfaction with Taoiseach Enda Kenny has also fallen to 29 per cent.

Tánaiste and Labour leader Eamon Gilmore has dropped to 17 per cent, a fall of six points since the last poll.

By contrast Micheál Martin has gained a point to 29 per cent, the same rating as Mr Kenny.

Sinn Féin leader Gerry Adams has dropped two points back to 27 per cent.

1:24 Biden pledges to put climate change at the heart of his agenda