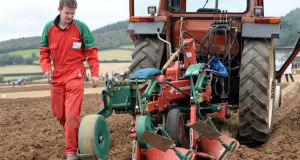 She said the “clothes of the environment should be on agriculture” because they are intrinsically linked.

“We have made the mistake and allowed others to talk about environment.”

The vice-chairwoman of the European parliament was speaking at a Macra na Feirme conference on the theme “Young Farmers – the New Environmentalists”, held in Abbeyleix, Co Laois today.

She told about 300 members of the youth organisation that “farmers are more than the custodians of the land. You are the managers of nature.”

Young farmers are the future of agriculture and the environment, she said. They should “know the environment issues, understand them but be part of the solution, don’t let others tell you what to do”.

She said sustainable intensification was the challenge — to produce more using less resources.

“It’s the challenge of the environment, which is around climate, biodiversity, sustainable use of resources and the young brains involved in farming, they’ll come up with solutions. Other organisations will talk about them but farmers will be the ones who will implement them.”

President of CEJA the European young farmer umbrella group Matteo Bartolini said it was not just the farmers and consumers who had to pay for environmental sustainability.

“Every link in the chain should pay,” he said.

He said they needed to “see how it is good for us to be farmers but also environmentalists”.

CEJA represents the interests of two million young European farmers and Mr Bartolini, from Umbria, said “young farmers are the new environmentalists and when they are given the necessary supports. They need to be able to farm as they would like to do.”

President of Macra na Feirme Kieran O’Dowd said the key message of the conference was that “young farmers are going to be the people best placed to deliver on sustainable agriculture in Ireland in the future.

“They are the ones who have grown up in an era where re-use, reduce and recycle is the order of the day.”

Macra has some 8,000 members of whom one third to one half are farmers, working on average 20 to 22 hectares of land.

He acknowledged there was a perception that farmers were major contributors to greenhouses gases through their cattle, but said that in Ireland, farmers operated on the Origin Green initiative, set up by the Department of Agriculture and An Bord Bia to encourage farmers to farm in an efficient and sustainable way.

“We do not have animals confined in stores and in feed lots like in other parts of Europe. The family farm model that is the one that’s most effective and most environmentally friendly because we don’t have large commercial units here.”

Sean Coughlan, chairman of Macra agricultural affairs committee told the conference “the countryside today looks like it is because of farmers. It didn’t happen by accident. It is actively managed.”

Mr Coughlan, a Co Mayo farmer, said “grass is Ireland’s key, key advantage. There are very few places in the world that can grow grass like Ireland.”

He said: “This is what we can do best. I’m growing three times more grass than when I started. It hasn’t cost me any extra but I am more focused” on its production.

“If everyone polluted like the Irish did we would need three planets to absorb all our pollution.”

He said globally emissions needed to be reduced by 50 per cent and in Europe by 95 per cent.

James Nix policy director of An Taisce, said very good environmental progress was being made in the beef and dairy sector.

“At the same time we need to look beyond these sectors, especially to horticulture, and make sure we reduce our 80 per cent import dependence.”